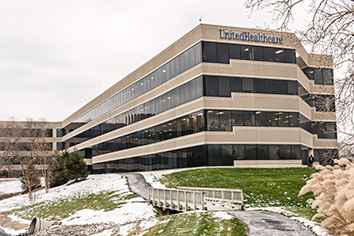 After sitting on the sidelines this year, UnitedHealthcare is getting back into Indiana’s individual-insurance game.

The Minnesota-based insurance giant started selling new individual insurance policies to Hoosiers on Nov. 15 in the federal Obamacare exchange. In addition, for the first time, it has begun to offer policies off the exchange that comply with Obamacare’s new rules.

That means the nation’s largest health insurer will once again be waging an all-fronts battle for business with Indianapolis-based WellPoint Inc., the nation’s second-largest insurer.

“The entrance of United, it is a game changer,” said Paul Ashley, a health benefits broker at Indianapolis-based First Person. “We’re starting to see the ‘individualization’ of health benefits.”

That’s because, Ashley said, UnitedHealthcare will have health plans on the exchange that offer the broad network of hospitals and doctors workers are used to seeing in their employer health plans.

Anthem’s narrow network was a “cause for concern” among many employers, Ashley said, who were considering ending their group health plans and sending their workers to the Obamacare exchange.

UnitedHealthcare’s broad network—which includes all of the state’s 169 hospitals and more than 16,000 physicians, physician assistants and nurse practitioners—is key to the company’s strategy to set itself apart from the nine other insurers offering individual policies in Indiana.

“As we evaluated the current offerings, we felt that there was an advantage to the consumer to offering that broad access,” said Dan Krajnovich, UnitedHealthcare’s CEO for Indiana and Kentucky.

UnitedHealthcare’s challenge, however, will be price. Its cheapest plan on the Obamacare exchange charges Marion County family consumers premiums that are about 16 percent higher than Anthem’s cheapest plan.

Even among the Silver plans that most Hoosiers chose this year, UnitedHealthcare’s cheapest plan is more expensive than Anthem’s.

“They’re not the cheapest, but they’re not astronomically off base,” said Matt Kleymeyer, a benefits broker at Bernard Health in Indianapolis. “It’s the age-old question about what’s going to pull the lever. Is it price? Or is it access to a doctor?”

Anthem executives have said, unambiguously, that the answer is price. And in 2014, they certainly looked right. Anthem attracted 83,000 of the 120,000 Hoosiers who signed up for coverage via the Obamacare exchange, according to figures from the Indiana Department of Insurance.

But unlike the three other insurers that sold on the Obamacare exchange this year, UnitedHealthcare has a brand name that could compete with Anthem’s Blue Cross and Blue Shield plans.

Krajnovich also thinks UnitedHealthcare will be able to set itself apart with the tools it offers to help consumers manage their health and shop for the care they need. That’s increasingly important, he noted, since the exchange plans have deductibles that reach as high as $13,000 for families—making healthy living and smart health care shopping more important than ever.

“They have a share in the cost, so they need to be empowered to control those costs,” Krajnovich said.

UnitedHealthcare was wary of Obamacare in its first year, choosing to participate on the exchanges in just four states.

So UnitedHealthcare offered the nearly 35,000 individual customers it had in Indiana at the end of 2013 the chance to just stay in those pre-Obamacare policies.

That was a cheaper option for its customers, because Obamacare required that all policies cover a list of 10 “essential health benefits” and that they pay for at least 60 percent of all expected medical expenses.

The health law also said insurers could no longer price their policies based on consumers’ health. Instead, they have to take all comers, charging more only if consumers are older or if they smoke.

Those changes pushed the cost of individual insurance in Indiana up 24 percent over what it would have been, according to a recent analysis by Yale University economist Amanda Kowalski.

UnitedHealthcare executives worried, as did many others, that only the sickest customers would sign up.

“For this market to be sustainable, it needs to have a balanced risk pool, and the composition of that risk pool on the individual side is uncertain at this point,” UnitedHealth Group CEO Stephen Hemsley told investors in the spring of 2013. UnitedHealth Group is the parent company of UnitedHealthcare.

But the worst fears didn’t materialize, which left WellPoint sitting pretty by being the first mover in the exchanges in the states where it operates. As a result, WellPoint’s stock price has surged 50 percent in the past year—versus a 32-percent bump for UnitedHealth Group.

Krajnovich declined to say how many Hoosiers UnitedHealthcare expects to sign up on individual policies this year—other than to joke that it wants them all.

But UnitedHealthcare’s actuaries predicted rather modest success in 2015.

According to the filings with the Indiana Insurance Department, UnitedHealthcare expects to sign up 4,935 customers on the Obamacare exchange and 1,319 off the exchange.

That’s a total of 6,250 members—or less than 10 percent of Anthem’s total from this year.

But the key test will be what happens a year or two from now. That’s when, according to federal regulations, even small employers will be forced to drop their pre-Obamacare plans.

When they do, about three of four employers will face big premium increases from Obamacare’s new rules, said Ashley.

Many might instead end their group health plans and send their employees to the Obamacare exchanges. Indianapolis-based RANAC Corp. did exactly that last year, dropping its UnitedHealthcare policy because the company could dodge a premium increase of more than $13,000.

“That was not a small increase,” said RANAC President Keith Pitzele. “And we continually have been getting double-digit increases” in previous years.

That move cost UnitedHealthcare eight customers and their dependents.

But going forward, UnitedHealthcare hopes its suite of insurance plans will catch customers—whether they have employer health insurance or are buying on their own.

“We certainly want to continue our relationships with those customers,” Krajnovich said.•