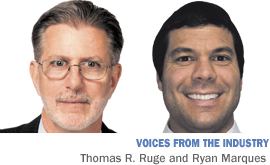 Although comprehensive immigration reform with bipartisan support might not be passed into law soon, the recent executive action by the Obama administration has some employer-friendly improvements in immigration law.

Since legislation in 1986, employers have been responsible for screening new employees for eligibility to work in the United States. The key form used for this screening is the I-9. For potential employees who are foreign nationals, only specific documentation meets the I-9 requirements.

The most widely publicized new provisions create a status for parents of U.S. citizens and for people who came to the U.S. at a young age. The status is called deferred action, which means action to deport or remove foreign nationals living in the U.S. without a visa or lawful status will be deferred.

Deferred action has been used under the government’s prosecutorial discretion since the mid-1970s. These new rules will allow successful applicants to obtain authorization for employment by any U.S. employer and will stop or prevent legal proceedings to deport or remove the successful applicant.

The potential employees who may qualify for this benefit include:

• Those who, regardless of age, have U.S.-born children or children who are lawful permanent residents, and who have been in the U.S. since Jan. 1, 2010.

There are more provisions for the spouse, parent or child of U.S. citizens or lawful permanent residents but who are stuck in the immigration process because of the penalties imposed on those who have lived in the U.S. without lawful status. The new rules make waivers of the penalties for unlawful presence here a little easier to obtain.

Also, the administration has promised to work with Immigration and Customs Enforcement to develop regulations for notice and comment to expand and extend the use of optional practical training for foreign students, consistent with existing law. The training allows a graduate of a university to work for one year with a U.S. employer following graduation, while remaining in a temporary student lawful status. The new rules likely will expand the availability and time for the training.

Perhaps the most helpful provisions relate to expanded availability of employment authorization for spouses of workers on H-1B visas and to facilitating the transition from temporary employment visas to permanent resident status.  Because of the limited number of employment-based permanent immigration visas, there are long backlogs (over 10 years in some cases) for those who have complied with all the procedures but are waiting for a visa.

In some cases, being in the green card waiting line makes it impossible for the worker to change employers or for his or her spouse to obtain employment authorization. The administration has promised to address these issues by allowing applications to be made earlier. Those who have an approved employment-based immigrant petition, but who are waiting for a green card to be available for distribution, will be able to change employers, and a spouse will be eligible for employment authorization.

H-1B visas are for professional workers who have been sponsored by a specific employer. They are widely used in the employment of foreign nationals who have professional diplomas from U.S. universities.

About 80,000 new H-1B visas are currently available each year, and the H-1B category is available for no more than six years in most cases. The spouse of an H-1B worker is not permitted to be employed under current rules. The proposed executive action would permit the spouse to apply for employment authorization.

The president’s announcement also promises a review of the procedures for employment-based permanent immigration. In most situations, employers who want to hire foreign employees for a permanent job and to sponsor the employee for lawful permanent status must prove a shortage of qualified U.S. workers. Many employer groups find the current method for proving the lack of U.S. workers available and qualified for the jobs unnecessarily complicated and time-consuming.

The president’s announcement calls for additional border security measures, as well. For example, the announcement asks Congress to provide funding for 20,000 additional border patrol agents. Proponents of the president’s announcement contend that the new deferred-action status will put into lawful status those who are no threat to the security of the U.S. and allow the use of enforcement funds, for deportation of criminals, those who have been ordered removed but who have not departed the country, and more dangerous foreign nationals. This policy is consistent with a recent agency memorandum regarding enforcement priorities.

Specifics of the new deferred-action provisions will be published in the coming weeks and implementation is expected in 90 days or less.

Some in the immigrant community are skeptical. The new processes for deferred action require a form of registration and sharing of much personal information. The fear is that this information will be used against applicants in deportation or removal proceedings in the future, possibly after political changes in Washington, D.C.

Opponents of this executive action contend it exceeds the president’s authority because, under the Constitution, legislative powers are reserved to the Senate and House of Representatives.

However, little is mentioned in the Constitution about immigration. Article I, Section 8, provides that the Congress shall have the power “To establish an uniform Rule of Naturalization … ” The powers of the executive branch of government to execute laws Congress has passed also are not specifically enumerated in the Constitution.

The Obama administration has been careful to use areas of discretion left to the immigration agencies in the immigration statutes themselves. These new rules will be drafted to avoid direct conflict with existing statutes. Whether or not this is done successfully will, no doubt, be a matter of much discussion.•

Ruge and Marques are attorneys at Lewis & Kappes.