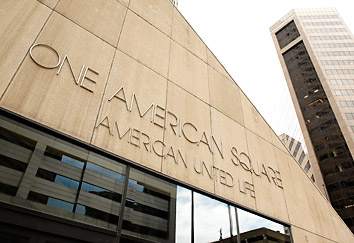 Take a lap around one of the floors OneAmerica occupies in its namesake downtown office tower, and it's quickly apparent why the company is undertaking a major redesign of its space.

The OneAmerica Tower at Illinois and Ohio streets opened in 1982, and to the chagrin of the life insurer’s 1,200 employees in the building, most of the original furnishings dating to the Ronald Reagan administration still remain.

To truly put it into perspective, the drab cubicles and carpeting predate the Indianapolis Colts move to the city by two years.

OneAmerica is embarking on its 10-floor renovation at a time many downtown office building owners are struggling to attract tenants. Overall occupancy in the central business district hovers around 80 percent.

OneAmerica Tower is a standout performer, with full occupancy, according to the latest IBJ statistics. While some building tenants have modern space, others have older offices. Watson said that once the company finishes its space, it may work with other tenants on upgrades to ensure the building doesn’t lose traction in the downtown market.

OneAmerica occupies floors two through 12, with top executives housed on the 12th. That floor is not part of the remodel because it’s been updated through the years.

Work to the seventh floor, which houses the company’s individual life insurance division, finished Nov. 10. It's the only floor completed so far. Work on another floor will start in the spring, with the entire project slated to take three years, Watson said. He would not estimate the total cost.

The designer is Indianapolis-based Axis Architecture + Interiors. The locally based firm has done similar work for companies such as Eli Lilly and Co., Cummins Inc. and ExactTarget.

“The [downtown] views are incredible from their floor plates, and they weren’t capitalizing on that,” Axis partner Drew White said of OneAmerica. “They had high furniture panels that block the views and the amount of natural light that comes into their space.”

OneAmerica and Axis started on the project two years ago with a “workplace strategy” study led by Axis. The result is a much more open area with no separating partitions. The new layout promotes collaboration among employees, even with division managers, who now are more accessible.

“The goal is to remove the hierarchy,” Watson said. “It was time to evolve.”

The new design features Informal, open areas where employees can plug in their laptops and encourage team meetings. On the other hand, if employees need more private space, four “focus booths” are available for one-on-one conversations. Such open-space concepts have been the trend in office design for several years and help companies shave costly space.

If employees feel the need to take a walk or get exercise, two standing laptop stations are equipped with treadmills.

The remodeled seventh floor also features a kitchen, eliminating the need OneAmerica employees who brought their lunches to trudge down to the basement to a vending area to microwave their lunches.

Jon Owens, an office broker at the Cassidy Turley real estate firm who leases the building, is encouraged by the steps OneAmerica is taking to improve its workspace.

“I think it’s significant for a large employer that owns its own building and has been old-school in terms of how they’ve housed their people,” he said. “To make a move like this and design space that is mostly open and collaborative, it’s just the total opposite end of the spectrum from what most of their people are operating in.”

Owens and Watson both credit CEO Scott Davison, who ascended to the top position in April, for continuing what former leader Dayton Molendorp had envisioned for changing the work culture at OneAmerica.

“We think it’s certainly a good showcase to show what you can make high-rise space look like,” Watson said.