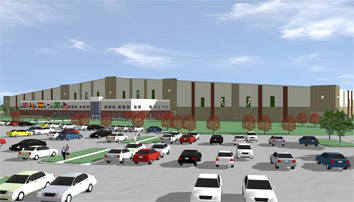 The Westfield City Council is expected to vote next month on a pair of subleases for the $25 million indoor soccer arena in the works at the city’s Grand Park sports campus.

The proposed 10-year deals, introduced to the council Monday, call for tenants Indiana Sports Properties and Byrd Enterprises Inc. to pay a combined $2 million-plus annually for space in the 371,000-square-foot facility.

If projections hold true, that would be more than enough to cover the city-backed project’s debt-service and operating costs, Deputy Mayor Todd Burtron told the council. Leftover funds—which he estimated would be about $250,000 a year—will be reinvested in the building.

The sublease agreements also include revenue-sharing provisions that could boost Westfield’s bottom line.

The city council in October approved a publicly funded master lease for the indoor facility, which is being financed and built by private developer Holladay Properties. It is slated to open by Jan. 1, 2016.

Indiana Sports Properties, which manages outdoor field operations at Grand Park (think soccer, lacrosse and football), will rent and program almost 350,000 square feet of the indoor facility, slated to include three full-sized soccer fields and locker rooms, among other amenities.

An indoor soccer facility always has been part of the grand plan for Grand Park, Westfield’s 400-acre, $45 million-plus bet on youth sports. By making it more of a year-round attraction, organizers hope to strengthen the complex's appeal to private businesses considering visitor-oriented investments in the area.

Byrd Enterprises (better known as Jonathan Byrd’s, of south-side cafeteria fame) will run a full-service restaurant on the property. Byrd’s plans for the soccer facility also include a separate sports bar, according to details spelled out in the sublease agreement.

Byrd would lease almost 11,000 square feet on the building’s mezzanine level for the restaurant, and another 6,000 on the second floor for what’s described on documents as both an “adult lounge” and a sports bar.

Under the deal, Byrd’s annual rent will start at $352,675, with payments increasing gradually until reaching $491,713 in year 10. The food-service vendor also would give the city 12 percent of profits from non-restaurant operations (special-events catering, for example) at the facility and Grand Park.

Westfield in turn would agree not to seek any other restaurants, caterers or sports bars for the facility.

In addition to the athletic facilities, Indiana Sports Properties plans to lease about 3,800 square feet of office space in the building. Its total annual rent: nearly $1.7 million.

The organization also agreed to work with city officials to schedule facility rentals, trade shows or other events there when the fields aren’t in use—part of Westfield’s plans to “commercially exploit” the potential of the venue from a revenue standpoint, the sublease document said.

After a four-year break-in period, the city and Indiana Sports Properties would share the proceeds of non-sporting events held at the facility. The city’s take increases along with profits, reaching a maximum of 20 percent.

The parties also agreed to share sponsorship money tied to the indoor facility or events held there. If the city brings the sponsor to the table, it keeps 75 percent, according to the sublease deal with Indiana Sports Properties. If it’s the other way around, the city keeps 60 percent.

The city council didn’t dig into the details of the deals at Monday’s meeting, but members are expected to discuss the proposals before voting on Jan. 12.