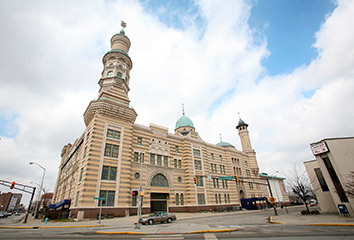 Live Nation has reached an agreement with the Murat Temple Association to buy the landmark Old National Centre entertainment and hospitality venue in downtown Indianapolis.

The Beverly Hills, California-based company operates the 2,600-seat Murat Theater, multipurpose Egyptian Room and other venues in the building at 502 N. New Jersey St. under a long-term lease with the association.

Live Nation said Monday that it is seeking to buy the historic facility that was built in 1909 and is the largest Shrine temple in the country.

“Shriners International must still approve it, and the sale could be completed sometime in late 2015,” Live Nation said in an emailed statement. “Because of the confidentiality agreement we are unable to discuss the transaction in … detail. We’re confident though that we will be involved in bringing great music and entertainment to the city for many years to come.”

Potentate Bill Rasner of the Murat Temple Association confirmed Tuesday the group had entered into an agreement with Live Nation to sell the property.

"We had not even considered selling until approached," Rasner told IBJ in an email, "We have known for many years that our facility has been much larger than we needed. After much consideration, we decided that we should move forward, ultimately reaching an agreement to [sell] with Live Nation."

Rasner declined to share more details about the deal, due to the confidentiality agreement.

The move by Live Nation could give it a slightly firmer grip on the Indianapolis-area entertainment market. It already owns the Klipsch Music Center in Noblesville. Live Nation leases, operates, books and/or has an ownership interest in 148 venues around the globe.

The temple, which sits near the heart of bustling Massachusetts Avenue, has a storied history. It is named for the Frenchman Joachim Murat, who was one of Napoleon's generals in his Egyptian campaign.

Its architecture is based on Islamic temples found in the Middle East and Egypt. Features of the building include stained-glass windows, terra cotta trim, minarets, and brown and yellow brick banding. The Egyptian-themed auditorium, added as part of the 1922 addition, had been planned before the discovery of Tutankhamun’s tomb, which coincided with the opening of the auditorium, according to the temple’s history.

The Murat Temple Association and Live Nation have a bit of history between themselves as well.

In 2010, they became entangled in a legal dispute over a naming-rights deal with Evansville-based Old National Bank for the venue.

MTA sued Live Nation, alleging that its lease did not include rights to rename the building and that the name change “caused Shriners to be held in lesser light by the general public, who erroneously believe Shriners were responsible for the name change.”

In August 2011, a state appellate court affirmed a Marion Superior Court’s dismissal of the naming-rights lawsuit brought by MTA.

Live Nation Entertainment Inc. is publicly traded on the New York Stock Exchange. Its shares have risen 31 percent so far this year, and were trading at $25.90 on Tuesday morning.