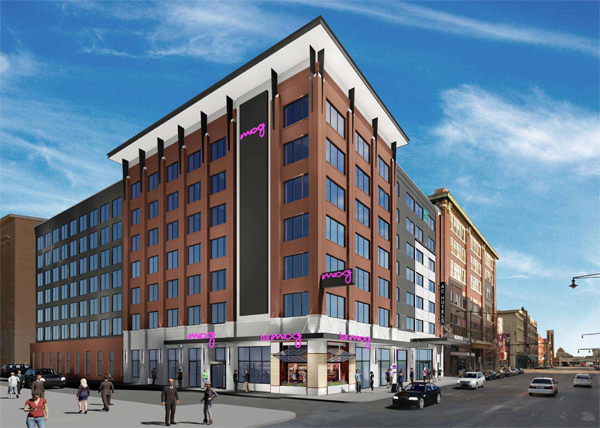 A rendering of the dual Moxy-AC Hotel development by White Lodging and REI, looking south on Meridian Street. (Image courtesy of the city of Indianapolis)

A pair of Indiana-based hotel developers are resuming plans for a $50 million dual-brand hotel project along South Meridian Street in Indianapolis, just weeks after the city altered the timeline for developing two hotels at Pan Am Plaza.

Merrillville-based White Lodging and Indianapolis-based REI plan to construct a seven-story, 206-room hotel at 125 S. Meridian St. The 99,000-square-foot building will be split almost equally between a Moxy and an AC Hotel—two of Marriott’s millennial-focused brands.

The L-shaped building is expected to house 104 Moxy rooms and 102 AC Hotel rooms. The hotel at the southeast corner of Chesapeake and Meridian streets will not have any on-site parking.

IBJ first reported in June the developers planned to build a Moxy hotel at the site—currently a parking lot—but at that time White Lodging Chairman Bruce White said the project was on hold.

White said developers were waiting to see what would be done with plans for a massive redevelopment of Pan Am Plaza that has been under scrutiny—mostly by White and other downtown hotel owners—since early March. The project, being developed by Indianapolis-based Kite Realty Group Trust, is comprised of two hotels totaling more than 1,400 rooms and an 80,000-square-foot expansion of the Indiana Convention Center. The $120 million convention center expansion is  being paid for through tax-increment financing.

City leaders and Kite this month agreed to develop the Pan Am project one hotel at a time instead of at the same time as originally planned. Mayor Joe Hogsett said construction of the smaller hotel would be delayed to allow the city “to ensure that market demand exists.”

Mike Wells, president of REI, told IBJ the 0.46-acre plot for the South Meridian Street hotel project is under contract, and the development team expects to close on the purchase by the end of the year. The purchase of the parcel is contingent upon the city’s approval of the hotel.

The developers requested a preliminary hearing before the Indianapolis Historic Preservation Commission for the development. It’s expected to be discussed during the commission’s Aug. 7 meeting.

Filings with the IHPC indicate the project could include as many as 210 rooms, with construction materials including brick, cast stone and stucco.

A development variance also is expected to be requested for certain architectural elements of the project, including the building’s uppermost floor, but that is not expected to be filed until after a vote by the IHPC.

While he declined to offer a purchase price for the property, Wells said the total cost of the development is expected to be “close to $50 million.” The developers do not plan to seek city incentives or tax-increment financing for the project.

REI and White have partnered on developments for each brand in other cities, including Louisville, Austin and Denver.

The project is “different from what we’ve done before” in Indianapolis, Wells said.

The Moxy will have guests check in at the bar, and will feature game tables and a large lounge area.

AC Hotel is a more European-inspired brand—it originated in Spain before being bought out by Marriott—and has more minimalist finishes.

The hotels will have separate entrances, with AC guests entering from Meridian Street and Moxy guests entering off of Chesapeake Street, to the north of the parcel. Each hotel will have its own elevators, but will share an outdoor courtyard.

The city is expected to add more than 2,500 hotel rooms over the next five years, not including the Pan Am project. It also has an average occupancy rate north of 70%—more than 3% higher than the national average.

REI and White Lodging have each adamantly stated they don’t believe the market can sustain the additional  hotel rooms planned for the Pan Am Plaza development, and have repeatedly asked the city to reconsider the project or cancel it altogether.

The city on July 19 said it would split the project into phases, first building the convention center expansion and an 814-room Hilton Signia. It plans to hold off on construction of the second Hilton-branded 600-room hotel, but did not offer a firm timetable on when construction on either phase is expected to begin.

Developers—including White Lodging and REI—”have been clamoring to build” in the city, even amid questions about what will happen with the plaza project, said Visit Indy Vice President Chris Gahl.

“Having a density of hotel rooms in one place attaching into our expanding convention center will move the tourism needle,” he said. “We value boutique projects like the proposed 200-room hotel on Meridian, which help diversify our portfolio and raise Indy’s brand.”

Wells acknowledged the project could raise some eyebrows, particularly given the developers’ opposition to the Pan Am project.

“We seriously questioned how we wanted to approach this project, and wanted to be sure we did this the right way,” he said. “But it’s really going after a different market than the other hotels that are planned downtown over the next few years.”

He said the project won’t disrupt the market the way the Hilton hotels would, since both Moxy and AC Hotel target millennials visiting the city for pleasure, rather than convention goers.

Atlanta-based firm PFVS is the architect on the project.

The city’s Department of Metropolitan Development and the mayor’s office declined to comment for this story.