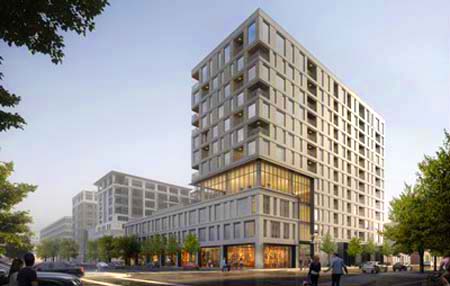 A long-delayed downtown apartment, office and retail development hit another snag Monday night when a City-County Council committee opted to stall a proposal that would have provided nearly $10 million in tax-increment financing to the project.

Plans for the proposed 11-story, $66 million project at 421 N. Pennsylvania St. were heard by the council’s Metropolitan and Economic Development Committee, as developers sought approval for $9.8 million in developer-backed bonds.

Denver-based Charles Street Investment Partners wants to construct 213 residential units, 27,400 square feet of office and retail space, and 214 parking spots on a parking lot at the northeast corner of Pennsylvania and Vermont streets that was once home to the Essex Hotel.

After more than 45 minutes of discussion, the committee split, voting 5-5 and opting to hold off on any recommendation to the full council, possibly delaying a project that has been under discussion for almost two years.

Committee member David Ray was absent Monday evening, leading to the tie. The full City-County Council could bypass the lack of a recommendation from the Metropolitan and Economic Development Committee and still consider the proposal at its Aug. 4 meeting if it chooses.

The proposal—given initial approval last week by the city’s Metropolitan Development Commission—calls for the developer to receive 80% of the increase in property tax revenue the development generates for the next 25 years to retire the debt, with the city receiving the other 20%.

Both the developer and the city said the bonds are required to move the project forward.

“This is really the max; it was a heavily negotiated TIF over a four- to six-month period,” he said. “There’s not really any room for us to move off of this. … It’s really ready to go, and there’s nothing else we can do at this point.”

Council members, including Democrat Zach Adamson, said that they see it as their responsibility to ensure tax dollars are used responsibly, and that they would consider the measure again during a future committee meeting.

Plans for the development call for studio, one-bedroom, two-bedroom and live-work units, 8,800 square feet of first-floor retail space and 18,600 square feet of office space. A portion of the building would be terraced, creating pool and recreation areas with green space on lower floors.

It also would have 42 workforce housing units, with rents ranging $200 to $1,000 below market rate, Dellaglio said. That figure would be maintained for at least 25 years. The developer also would make a public arts contribution of $98,520, which will not be paid for from bonds.

The tax assessment for the completed project would be about $39 million, meaning about $800,000 in taxes would be collected annually from the site. That would be split 80-20 between the developer and the city over 25 years.

The site would generate about $159,650 in additional tax revenue per year for the city, more than eight times the $17,000 it brings in annually as a parking lot.

Adamson and Republican council member Jefferson Shreve said they would like to see more workforce units pledged for the development.

“This seems like an expensive proposition compared to what we’re getting out of it,” Shreve said.

Adamson said he had “heartburn” over the project, noting he believed more could be done to promote affordable housing than including 42 units in a mostly market-rate project. He said he doesn’t think the affordability component is “affordable at all.”

“It seems to me … that the city has become a method for padding profit margins of developments throughout the city,” he said. “I’m not comfortable supporting a proposal [that does that].”

Another Democratic council member, Jared Evans, who ultimately supported moving the proposal to the full council, said the city has “an affordability problem” and would prefer to see more workforce units in the development.

The city used guidelines from the U.S. Department of Housing and Urban Development to determine how many affordable housing units would best fit the project.

Speaking in favor of the project, Republican council member Colleen Fanning said she was encouraged by the increase in tax base that would come from the project.

“It’s not nothing,” she said. It’s still a very big increase … for a very different type of project.”

There are no plans for Charles Street to seek a tax abatement for the project, Dellaglio told council members.

The development would create an estimated 135 construction jobs, as well as 128 permanent jobs from office and retail uses after the development is finished.

The project has been in the works since late 2017, but stalled after neighboring condominium owners expressed concerns over the its design, including potential sight-line obstructions.

The original plan called for $15 million plan development with seven stories, 160 apartments, 2,200 square feet of retail space and 157 parking spaces. That design was updated in late 2018 to include 209 units and an increased parking count.

The committee’s stalemate muddies the project’s timeline. It was slated to be heard by the full council on Aug. 4. If approved on that date, it would go before the MDC on Aug. 21.

The next committee meeting is Aug. 26.

Charles Street wants to break ground by the end of the year, with completion of mid-2021.

Seattle-based firm NBBJ is the architect on the project.