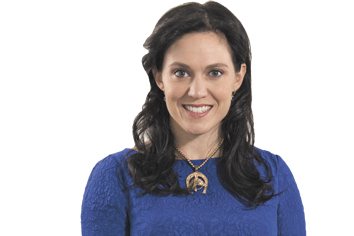 First down: Early on, Jim Irsay told his daughter Carlie that she didn’t have to go to business school to learn how to run a team—she just had to get her hands dirty. Her first job stop: the ticket office because, she said, “I couldn’t be a ball boy or clean jockstraps in the locker room.”

The other horse: Irsay-Gordon grew up as an equestrian rider and attended Skidmore College in part because of its excellent riding program. “My dad used to say, ‘If you think concussions are bad [in football], you should see my daughter.’” She’s had five of them.

Liberally artful: “My problem has never been that I don’t know what to do,” Irsay-Gordon said. “I’m interested in everything. I was the one constantly raising my hand in school.” Attending a liberal arts college—majoring in religious studies at Skidmore and working toward a doctorate in clinical psychology from Argosy University—fostered an interest in “how people choose different ways to make meaning in their lives.”

Those interests extend to her work on local boards, including Riley Children’s Foundation, Park Tudor School and the Eiteljorg Museum of American Indians and Western Art. “Could you imagine a world without art and music? I can’t and wouldn’t want my kids to grow up in a community that didn’t have that.”

She’s the boss(ish): “I don’t think of myself as the boss,” she said. “I grew up here.” She attended her first NFL owners’ meeting in 2003. “It’s pretty overwhelming at first,” she recalled. “But that’s when I really started to get the importance of understanding the financial side of the business.”

Trash talking: Her attitude about negative sports chatter: “I’d rather have people on social media saying pernicious things than not saying anything at all. People care and I appreciate that.” As for sports media: “They don’t have the whole story. They never will. They are just trying to do their job—to stand out in the noise. If you don’t have thick skin in this business, you aren’t going to survive.”•