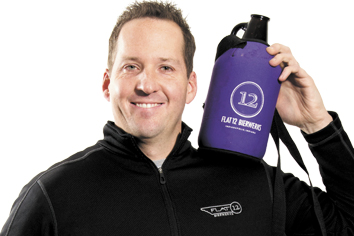 For the record: When did he become interested in beer? “At 21, of course,” said Sean O’Connor, a fifth-generation Indiana University grad. His true passion for brew brewed while working for Klipsch in Copenhagen (hence his son’s and oldest daughter’s Danish names). “I’ve always had a passion for entrepreneurship, but wasn’t sure what that business would be.” When he returned to the states, he decided to take a risk launching Flat 12 Bierwerks.

The tipsy-ing point: “We were open for a little over a year and we were invited to a beer festival in Nashville, Tennessee,” O’Connor recalled. Previously selling only around Indianapolis, he and his partner decided, “Let’s see how the beer does where nobody knows us.” Flat 12 Half Cycle IPA earned requests from restaurants and distributors, and O’Connor set his sites on expanding to other markets. “People wonder why we jumped over Kentucky, but that’s why Nashville was the first city we went to outside of Indiana.”

Building to a head: In fewer than three years, Flat 12 became a multistate supplier and grew to a staff of 30. “People ask, ‘How many states do you want to be in?’ Honestly, I don’t know. I want to be strategically placed in markets that want us.” He spends a lot of time talking to distributors and restaurants as well as negotiating sponsorhips. “We want to do business with people who truly want to be partners.”

Fun and froth: “We look at it as, we’re in the entertainment business,” O’Connor said. “But it’s a lot of work. In the beginning, people asked, ‘What are you doing for a real job?’—but I was working 90 hours a week.”

Pass it around: Flat 12 has provided charitable support to hundreds of organizations including Heroes Foundation and The Children’s Museum of Indianapolis (for adult events, of course). “You can’t say yes to everyone. But it’s one of the things I enjoy, being a part of the community and giving back.”

I get a kick: O’Connor couldn’t resist driving down to Bloomington when he saw Flat 12 was available at Nick’s, just off campus from his beloved IU. He told his wife, “Just pretend you’re checking your phone and take a picture of me at the bar with the Flat 12 tap handle in the back.”•