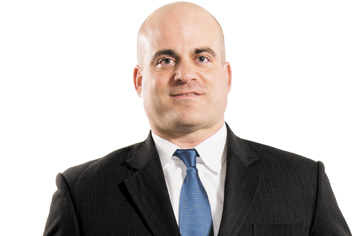 Major commitment: Trent Sandifur went to Harvard University via ROTC, then followed up with the University of Notre Dame Law School and a master’s from the University of Chicago before serving as a U.S. Army Judge Advocate General lawyer. In the Indiana Army National Guard he rose to the rank of major. “I would have gone in regardless, but certainly covering tuition, was a nice bonus,” Sandifur said. Another plus: “I’d see law school friends lining up 25 interviews. Knowing that I had that service obligation coming, I just watched. I didn’t have to deal with the job hunt.”

Training days: For three years, Sandifur prosecuted civilian offenses from misdemeanors to felonies on military bases. “There are more non-military folks on bases than military. They are like little cities. Anything you find outside, you’ll find there.”

Almost elsewhere: Hours away from accepting a job at a Chicago firm, Sandifur was contacted by his sister-in-law, who worked at the predecessor firm to Taft Stettinius & Hollister and told him about an opening. “I interviewed and accepted the offer that evening. I felt bad for the headhunter from Chicago. I think he had already spent his commission.”

In the zone: While in the Army National Guard, he served in Afghanistan, providing legal advice to U.S. and NATO senior commanders. “Nothing can prepare you for life in a combat zone other than being in a combat zone,” he said. “Taft couldn’t have been more supportive,” he said of his five-month stint overseas. “They took great care of the cases I had going. And, when I came back, we didn’t skip a beat.”

Bribery will get you nowhere: Sandifur specializes in Foreign Corrupt Practices Act law—which prohibits the bribing of foreign government officials to gain a business advantage. “In theory, that sounds pretty simple,” he said, “but in emerging markets, bribery and paying off government officials is fairly standard business practice.”

Beyond the office: Still hooked on traveling, Sandifur spent three weeks in the fall of 2013 teaching in Zanzibar, off the east coast of Africa. He serves on the board for Special Olympics of Indiana and as vice chairman of the Hoosier Veterans Assistance Foundation, and is a former vice president of the Harvard Club of Indiana.•