Advertising paying off for Hamilton agency

Visitor spending in 2014 resulting from regional advertising initiatives by Hamilton County Tourism Inc. exceeded $100 million, a 42-percent increase from 2013, according to a study recently released by the agency.

Carmel-based Strategic Marketing & Research Insights Inc., which counts many of the biggest U.S. convention and visitor associations as clients, conducted the annual study to measure the success of HCT’s campaigns.

About 193,000 household trips in 2014 can be attributed to the efforts, resulting in more than $105 million in visitor spending, the study found. 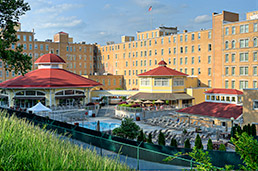 Officials for French Lick Resort in southern Indiana on Jan. 15 unveiled a $20 million, 58,000-square-foot expansion to the resort’s 109,000-square-foot conference and event center.

The natatorium had been selected as the host site of the 2016 U.S. Olympic Team Trials for Diving. USA Diving will partner with the ISC on both events.

“The 2015 Winter National Championships will be an extremely important competition for USA Diving as we continue our preparations for Rio 2016,” said USA Diving CEO Linda Paul. “Having the Winter Nationals in Indianapolis will allow our athletes an opportunity to familiarize themselves with the venue in advance of the 2016 U.S. Olympic Team Trials.”

The 2015 Winter National Championships will be of particular importance, as the meet will double as the U.S. selection trials for the 2016 FINA World Cup. The World Cup, to be held in Rio de Janeiro, marks the final opportunity for countries to earn their qualifying spots into the 2016 Olympic Games.•

Changes are in store for a 7-year-old grant program that funds local projects to attract visitors to Hendricks County.

Previously, Visit Hendricks County required the fund recipients to come up with a dollar-for-dollar match. A new component this year will not require a match for requests up to $500. Requests for more than $500—with a $2,500 cap—still necessitate matching funds.

“We don’t want to leave anyone out, especially someone who needs a little seed money to turn a great idea,” said Sarah Ferguson, Visit Hendricks County’s director of marketing.•