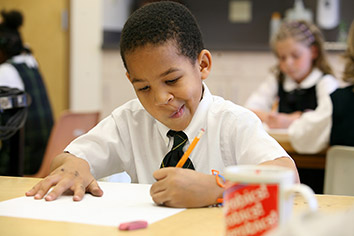 But changes in the funding system proposed Monday appear likely to funnel most of those extra dollars to wealthy and growing suburban school districts, while some of the poorest and shrinking districts could actually get less money.

Indianapolis Public Schools, for example, would see a 6-percent reduction in total state tuition aid by 2017 despite being one of the state’s poorest districts, with more than 75 percent of children coming from families that are poor enough to qualify for free or reduced-price lunch. Some of the state’s other poorest cities also would face basic tuition aid cuts: 19 percent for Gary, 10.5 percent for East Chicago and 3 percent for Hammond by 2017.

Meanwhile, the two wealthiest school districts in the state for family income—Zionsville and Carmel—would see large increases in total state basic tuition aid: 10.6 percent and 10.7 percent, respectively, over the two-year budget period. Neither district has more than 10 percent of its students qualifying for free or reduced-price lunch.

“I’m happy to see some school corporations are getting more, but I’m disappointed IPS might potentially be on the losing end in terms of less funding,” IPS Superintendent Lewis Ferebee said.

Besides IPS, no other Marion County school districts would see their basic state tuition aid go down, and several see strong gains.

Under the budget plan, crafted by House Republicans, K-12 schools statewide would see a 4.7-percent increase over two years through 2017. The added money for schools was much more than in the last two-year budget, which raised school aid by about 3 percent through this year. Overall, tuition support for public schools will rise by $469 million, to a record high of $6.9 billion, up from the all-time high in the last budget of $6.7 billion in 2015.

Rep. Tim Brown, R-Crawfordsville, the chairman of the budget-making House Ways and Means Committee, hailed the school funding plan as making progress to improve the funding system after years of complaints about how school dollars are divided up.

Extra money added to the basic tuition amount for each student—called the “foundation” level—benefits all schools, Brown said.

“I feel very comfortable that it substantially increases the foundation,” Brown said. “As we look at money following the child, it does an adequate and equal job of funding of the services they need within the budget limitations that we do have.”

The proposal would make some big changes to the way schools are funded, especially for how extra aid for poor and disabled children is paid out.

For example, extra dollars to help poor children, who often start school behind their peers on skills such as reading and math, would be calculated based on the number of students who come from families poor enough to qualify for free lunch. In the past, that factor also counted in children who are not as poor but still qualify for a reduced-price lunch based on family income.

That change appeared to translate to less state aid for several high-poverty districts, according to estimated aid numbers provided by House Republicans.

For IPS, at least, there would be far more dollars lost than gained under the proposed new formula. The changes in the poverty calculation—called a “complexity index”—alone could result in a 14-percent drop in poverty aid to the district, for example.

Going backward on total state aid for any district, much less those with the most poor children, is tough in a time when education dollars are already tight, Ferebee said

“It’s disappointing that anybody loses funding,” he said. “We all know education is not funded at the level we’d like it to be.”

Since Republican leaders said earlier this year that reworking the school-funding formula would be a priority, suburban and city school leaders have worked behind the scenes to try to make their cases for more money—or at least not to lose ground.

Wealthy, mostly suburban schools have argued Indiana’s school-funding formula is unfair because they receive the smallest amount of state aid—in some cases not enough to provide basics, they have argued—but are producing the state’s best test scores, graduation rates and other student-performance results.

But the state’s poorest school districts—many of them centered in Indiana’ most economically distressed cities—argued the extra money they receive is desperately needed to educate very poor children who often come to school far behind their peers.

After Republicans took control of both houses of the Indiana General Assembly in 2010, they pushed for more equal school funding. A plan to adjust the state’s basic per-student aid levels is about halfway through a seven-year process designed to narrow the gap between the high-poverty districts, which receive the most aid, and the wealthiest districts, which receive the least. The new budget would accelerate that timeline to complete the process early, by 2016.

That gap, which for 2015 is estimated to be a $2,787 difference between the districts the formula deems poorest and wealthiest, would be dramatically cut to just $1,618 more for the poorest district over the wealthiest.

Other school funding changes the proposed budget would make include:

—Kindergarten students would each count as one student in the formula. Previously, they counted for one-half of a student but received some extra aid through grants. Ferebee said he was pleased by this move, saying lawmakers deserved credit for making it a priority.

—About $40 million would be set aside for grants to help charter schools with building, transportation and other non-classroom costs.

—A cap of $4,800 for elementary school students who use publicly funded vouchers to pay private school tuition would be removed. Children could receive up to 90 percent of their home school district’s state tuition aid amount. The estimated additional cost to the state for the change is about $3.5 million.