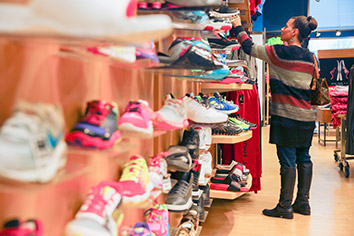 The mixed news sent the shares briefly higher, before they fell in very heavy trading Friday morning. By 11 a.m., more than twice the usual volume of shares had traded for a range of $23.33 to $25.08 apiece.

Analysts were expecting earnings of 85 cents per share on revenue of $550.3 million.

Same-store sales, a key figure that considers stores open at least a year, increased 2.6 percent. But Finish Line said it expects full-year earnings for fiscal 2016 to be $1.67 per share, below analyst expectations for $1.81.

Finish Line's board authorized the buy-back of 5 million company shares, adding to an existing authorization with 1.2 million shares remaining. The company bought back 2.7 million shares for $68.1 million in fiscal 2015.

“We quickly reduced expenses and gained better leverage to deliver earnings ahead of plan,” he said in a prepared statement. “At the same time, we made progress rebalancing our inventory to better align with customer demand.”

For the previous quarter ended Nov. 29, one-time costs took a toll on profit, which ended up at $2.6 million. As a result, company shares tumbled by about 20 percent.