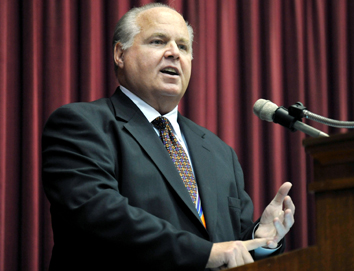 WIBC-FM 93.1 is pulling the plug on "The Rush Limbaugh Show," a vastly popular program with conservative talk-radio fans and one of the most listened to in this market since it began airing on the station 22 years ago.

The show's last airing on WIBC is set for July 3.

Officials for WIBC parent Emmis Communications this month notified Los Angeles-based syndicator Premiere Networks that it would not extend its deal to air Limbaugh’s show.

The change does not mean WIBC—one of Indianapolis’ most listened-to radio stations—is abandoning its conservative talk format, station officials said.

Although WIBC officials declined to say how much they pay to air Limbaugh’s show, industry sources said Premiere typically requires a significant fee plus control of some of the advertising inventory during the show.

Despite the hefty price tag, “this was not primarily a financial decision,” said Charlie Morgan, Emmis’ local market manager.

“It’s not an inexpensive show to air, so there is a business element to the decision,” Morgan said. “But this has more to do with the long-term direction of the station.”

“We began to discuss how we plan for long-term dominance in this format, and that’s what led us to this result,” Morgan said.

Premiere is in talks with local stations about picking up the show, a company spokesman told IBJ on Monday morning.

“We look forward to announcing a new home for 'The Rush Limbaugh Show' in Indianapolis soon,” said Rachel Nelson, director of public relations for Premiere.

If Premiere does find another station willing to pay the significant price to air the show, it could pull it from WIBC earlier than July 3.

While Limbaugh, 64, remains hugely popular with listeners over 55, Morgan said there is a desire to build a lineup that appeals not only to WIBC’s older core audience but also those in their 40s and younger.

“Rush’s show has not been a ratings disaster,” Morgan said. “Ratings is not the driving force behind this decision.”

Emmis officials could not immediately provide ratings numbers for the Limbaugh show. Still, Emmis officials say that the program, which airs from noon to 3 p.m. weekdays, is no longer the runaway ratings king among WIBC shows as it once was.

Tony Katz’s morning show and the locally produced "Chicks on the Right," both added to WIBC's lineup in the last 18 months, rival Limbaugh’s audience now.

As part of the move, WIBC will reconfigure its daytime lineup.

While Morgan expects some WIBC listeners to be “hugely disappointed” by the change, he said losing Limbaugh could open up the station to more advertising opportunities.

There are some—primarily national—advertisers that refuse to air commercials during Limbaugh’s show, Morgan explained. Emmis officials began notifying its advertisers of the change Monday.

“We believe this could open us up to a new group of advertisers,” he said.