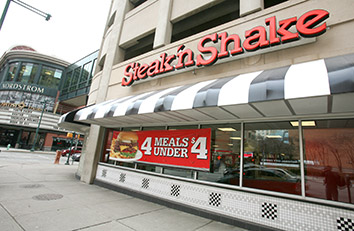 Activists upset over governance practices at Biglari Holdings Inc., parent of Indianapolis-based Steak n Shake, fell about 270,000 votes short of getting any of their six board nominees elected at the company’s April 9 annual meeting.

Biglari Holdings late Wednesday afternoon filed a vote tally from the meeting at the St. Regis Hotel in New York City. The company had previously said only that CEO Sardar Biglari and the company’s other five incumbents had been “overwhelmingly” re-elected.

San Antonio-based Biglari Holdings has about 2 million shares outstanding. Holders of the shares could cast their votes in favor of nominees or express dissatisfaction by withholding votes. (Full results are below).

Groveland faced an uphill battle because it owns only about 0.2 percent of Biglari Holdings stock, while CEO Sardar Biglari holds voting rights for nearly 20 percent of the shares.

Even so, Groveland officials said they nearly won over enough heavyweight investors to prevail. Affiliates of billionaire investor Mario Gabelli, which own nearly 10 percent of the shares, slid into Groveland’s corner. But two other big investors that did not cast their votes until the 11th hour—Blackrock Inc. and the Vanguard Group, which together own 13 percent—ended up siding with incumbents.

“If a few shareholders or a few institutions had changed their minds, it would all have been different,” Groveland CEO Nick Swenson said after the April 9 meeting.

Groveland’s campaign suffered a huge setback earlier this month when Institutional Shareholder Services—by far the most influential firm in advising investors on how to vote on proxy matters—refused to back any of Groveland’s candidates. It agreed governance was a mess at Biglari Holdings but said Groveland’s slate was too inexperienced and its plan to run the company too sketchy.

ISS was critical of a 2013 deal under which Biglari licensed his name to the company for 20 years. He won’t receive royalties if he remains atop the company, but if he were forced out for anything but malfeasance, he’d receive 2.5 percent of sales for five years—a sum that could surpass $100 million.

The advisory firm also took aim at a convoluted corporate structure through which Biglari Holdings has shifted more than $600 million in assets into the Lion Funds, investment vehicles controlled by Biglari himself.

Groveland argued drastic action was needed based on the stock’s underperformance, the company’s declining profitability, strained franchisee relations and poor corporate governance—including an unusual arrangement that allows Biglari to earn tens of millions of dollars in fees managing company assets. His total 2014 compensation was $35 million.

Biglari officials, on the other hand, said their discount-pricing strategy had worked magic at Steak n Shake, leading to 25 consecutive quarters of increasing same-store sales, and they say initiatives are underway at other subsidiaries that also will build long-term value.

Winning directors, the number of “for” votes and number of “withheld” votes:

–Ruth Person, former administrator in higher education and current professor of management at the University of Michigan-Flint: 836,812, 351,134.

Defeated nominees, number of “for” votes and number of “withheld” votes: