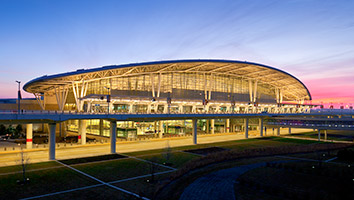 Officials who manage the Indianapolis Airport Authority’s $1.1 billion in bond debt typically refinance bonds when they can shave at least 3 percent off total remaining debt payments.

These days, 3 percent seems paltry. The Indianapolis Local Public Improvement Bond Bank handles what the industry calls bond refundings for entities including the airport, and it recently helped refund a $165 million airport bond to chop total projected debt obligations by about 9 percent.

MORE FROM IBJ
See the huge savings cities are receiving by refinancing.

“Those are incredible savings,” said Gregory Clark, executive director of the Indianapolis Bond Bank. Clark said since 2012, the airport has refunded four of the six bonds involved in building the 1.2-million-square-foot, 40-gate facility, effectively eliminating $59.5 million in projected payments through 2034, after adjusting for inflation.

Those kinds of opportunities have sent the bond bank and other municipal bond issuers on a refinancing tear the past few years. Historically, new municipal capital has outpaced refundings. But from January 2012 to December 2014, some $600.2 billion of municipal bonds were refunded nationwide, compared with $445 billion in new bond issues, according to the Securities Industry and Financial Markets Association.

And things don’t appear to be slowing down. In the first three months of 2015, there has been $75 billion in refundings versus $30.4 billion in new issues.

Some in the industry, including Clark, point to Federal Reserve policy as one of the factors behind the refunding spree. On Dec. 16, 2008, the Fed lowered its key interest rate to 0.25 percent, which ultimately sent bond yields lower.

Refinancing allowed Greenfield to save money on bonds that funded a water works project. (Photo courtesy of city of Greenfield)

The move was aimed at stimulating the economy during the Great Recession. Nearly seven years later, it’s still unclear when the Fed will increase rates to ward off inflation, but some bond issuers are rushing to refinance debt—sometimes prematurely—before sizable interest-rate spreads tighten.

Speaking of municipalities advised by H.J. Umbaugh & Associates, partner Brian Colton said, “If there’s one that they want to refund and they like that savings amount, you typically move pretty quickly because you don’t know what’s going to happen with rates.”

Average interest rates on AAA-rated, 20-year bonds hovered between 4 percent and 5 percent a decade ago, according to Thomson Reuters Municipal Market Data. Bond issuers usually have to wait 10 years to refinance without incurring a penalty, so today, they can effectively refund those old 20-year notes for 10-year notes with a 2-percent yield.

Municipal bond issuers typically have always been able to extract savings by refunding. But since the Fed lowered its key rate in 2008, the savings have been particularly attractive.

Using Thomson Reuters data, IBJ analyzed the difference, or spread, between yields on 10-year notes and 20-year notes from exactly a decade earlier. The average spread has been about 2.49 percentage points—or 249 basis points—since Dec. 16, 2008.

Over the same span before that date, the average spread was about 189 basis points.

Greenfield is one example of a local municipality that took advantage of wide spreads. The city’s water utility issued $11.3 million in debt in 2004 for its Beckenholdt Park water works project, and had $8.6 million left to pay in principal and interest as of January.

Otto “Buzz” Krohn, the city’s municipal bond adviser, helped the utility slash that $8.6 million to $6.5 million by refunding the bonds. After the costs associated with refinancing, the utility saved $955,000.

“They gave us rates that were over 2 percent but less than 2.5 percent,” Krohn said about the debt, which has a blended interest rate structure. “We were trading off rates that were between 4.25 percent and 4.75 percent.”

Not only have the savings been relatively higher since 2009, but there have been more opportunities for sizable savings.

Yields on new 10-year bonds have been at least 250 basis points lower than yields on decade-old 20-year bonds for more than half of the 332 weeks following the Fed’s rate decrease, according to an analysis of Thomson Reuters data.

The result: Municipalities have had more opportunities to refund for big savings.

Carmel, whose population has leapt 60 percent since 2000, has issued nearly $500 million in debt since then. The bonds have been used for projects including The Palladium at the Center for Performing Arts, the Keystone Avenue road project and City Center.

City officials have refunded six bonds since 2011, including three in 2014, and have achieved an inflation-adjusted $64.2 million in savings through those transactions, according to city records provided by Umbaugh.

“The bonds that were issued in the mid-2000s are reaching their sweet point for refunding as they approach their call dates,” Umbaugh’s Colton said.

Some municipalities have been pulling the trigger on refundings before bonds are callable at the 10-year mark. The move, called advanced refunding, entails paying debt service on two notes until the old note becomes callable.

The further from the call date, the more costly the maneuver.

The savings might have grown had the city waited for call dates, but city officials decided to lock in the $14.7 million.

How savings are used

Total savings aren’t fully realized until bonds mature, but bond issuers will see it gradually in the form of lower debt-service payments.

Some city officials plan to use the money they save through refinancing for other expenses. Carmel Mayor Jim Brainard said the savings that have stayed in the city’s general fund will help pay for expenses like firefighters and sidewalks. For its separate redevelopment fund, the savings will help fund new projects, he said.

Noblesville Mayor John Ditslear said savings should help the city bolster project ambitions. For instance, he said elected officials there intend to spend $1.3 million on street resurfacing next year, and, “Frankly, if we had twice that [amount] that we were able to spend, then we would.

“So these savings over the next several years will help do things like that.”

Some bond issuers have opted to keep debt service payments steady and lower the term of the loan. Krohn, Greenfield’s bond adviser, said he’s witnessed bond issuers taking the savings “on the back end instead of the front end.”

Jennifer Wilson, a Crowe Horwath director specializing in municipal finance, said savings can mean two things for utilities: “It will either, one, postpone a rate increase … or it will give them funds for additional capital projects.”

Savings entail relief for some municipalities. Noblesville has had to divert general-fund cash in the past to help service debt of some projects, said Howard, the city attorney.

The city can now keep that general fund cash and use it for things like public safety hiring, Howard said.

Speculation has swirled for years that the Fed will raise interest rates to ward off inflation, but the key rate remains at 0.25 percent. Fed policymakers await sustained momentum in the national economy before acting.

Economists thought a rate hike might come in June, but the predictions have been pushed back because of recent economic weakness.

So no one knows how soon the Fed will increase rates. But even if they stay flat and yields on 10-year, AAA-rated municipal bonds—around 2 percent lately—stay flat into the 2020s, interest rate spreads will shrink.

That’s because 20-year, AAA-rated bonds have dipped near 2 percent in recent years.

“When you’re at historically low rates like we are right now,” said Umbaugh’s Colton, “there’s a good possibility that 10 years out that you might not be able to refund something.”

Rates and spreads are unpredictable, so some bond issuers are moving swiftly to lock in savings and aren’t finished yet.

“Because we’ve rarely ever seen rates this low,” Clark said, “you really have to look at everything, whether it’s callable or not.”

Officials at Umbaugh said they’re considering an advanced refunding on a Carmel bond that’s callable in 2021.

Howard, the Noblesville attorney, said interest rates could get lower before they get higher. But Noblesville isn’t banking on that and has decided to exit the guessing game with its $14.7 million now.

“If they go down 10 or 15 basis points, yeah, maybe you save that. But it takes 60 days to put one of these deals together. It’s not like you’re sitting there at your computer and interest rates go down 20 basis points and you lock.”•