Home » Advice for Indianapolis’ next mayor 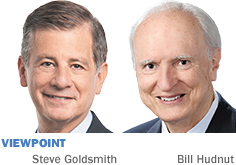 The next few months will set the tone for a new administration and the city’s future. Based on our time in city and county leadership, we recommend the candidates give attention to the following civic paradoxes:

Indianapolis was built on bipartisan agreement. Of course, parties often championed different policy views, but for decades, every big idea for the future of the city benefited from broad agreement.

Eschewing polarization at the local level is essential. There’s no Republican or Democratic way to pick up the trash or plow the snow!

The country needs healing, civility, cooperation and a willingness to compromise in order to get things done. Indianapolis is a diverse city that requires the victor to run a transparent administration that is inclusive, not exclusive.

Eschew cronyism. To the victor should not belong the spoils. Appoint some members of the other party to key positions. Be a mayor for all the people; be an agent of reconciliation.

The metro area is the goose that lays Indiana’s golden eggs in jobs created, conventions attracted and revenue paid to the state.

Indianapolis also serves incongruously as one of the most concentrated areas of poverty in the state. With more wealth each day spilling out of the city, but the poverty remaining, nothing will be more important than economic development.

Many areas in the city need jobs. Use the tools you have available, like tax abatement, zoning, grants, loans, tax increment financing. Downtown, despite its impressive successes, will need attention to keep its retail and office markets healthy.

Make the biggest difference where you have the least authority: education.

As both an equity issue and one of economic development, no single issue will more determine the future of Indianapolis than education. If we continue to fail large numbers of young men and women of color who do not graduate from high school with a quality education, we will not be successful.

The success of hot neighborhoods requires intense work in others.

Indianapolis finds itself at a crossroads. Increasingly, the young, creative, professional class wants to live in an exciting, tolerant downtown area that celebrates diversity. But the events of Baltimore show us that equity, hope and respect need to be universal.

Remember that the urban fabric is stitched together with many little things—corner stores, small eateries, flowers and trees, schools and parks. Promote adaptive reuse of old buildings. Show that you are bending the arc of your administration toward making strong the broken places.

We have had a remarkable record of sustained progress in the city. The candidate who wins in November must remember that inclusivity, equity, jobs and education build success.•