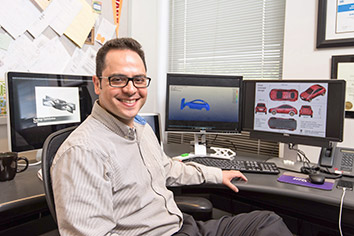 Tovar, a 43-year-old Colombian native, is an assistant professor of mechanical engineering at IUPUI and director of the school’s Engineering Design Research Laboratory. His fields of interest include biologically inspired design organization—improving human-made products using solutions found in the natural world. He got wind of the competition in November 2014. It seemed like a good fit for him, though the scale of the project, and its tight timetable, posed a challenge.

“I’ve been working in [automotive] crashworthiness for over 10 years,” he said. “I thought it was a perfect opportunity for me, because it’s what I’ve been doing for a while. But this competition was about creating a full vehicle. It was a new challenge for me, going from component design to full-vehicle design. A very interesting challenge.”

Indeed. The parameters of the contest, which was staged by the Advanced Research Projects Agency—Energy, a federal-government organization, and the Chandler, Arizona-based car company Local Motors, were evident in its name: the Lightweighting Technologies Enabling Comprehensive Automotive Redesign (LITECAR) Challenge. Essentially, it was an effort to develop concepts for vehicles that weighed far less than conventional cars but still met U.S. automotive safety standards. As the winner, Tovar received the $60,000 grand prize.

He competed with about 250 teams from around the world. Tovar spent December 2014 thinking about what he wanted to do, then got to work.

He designed his hypothetical vehicle around a naturally aerodynamic shape—a raindrop. The internal structure, responsible for both the vehicle’s strength and light weight (about 20 percent less than a conventional vehicle of the same size), consists of a latticework of aluminum-alloy support struts modeled after the human rib cage, nestled under a polymer composite “skin.”

Referred to as WaterBone, the structure creates both stability and extreme crashworthiness. It’s similar to the tubular steel roll cages in racing cars, but employs state-of-the-art design algorithms, materials and manufacturing techniques.

Four IUPUI graduate students helped Tovar with everything from running computer crash simulations to developing design algorithms. To put it perhaps a bit too simply, those algorithms attacked the contest’s central problem—making a lighter car that could survive crashes—using the same solutions nature might employ.

“This is a bio-inspired design algorithm,” Tovar said.

“People have thought around the idea of an exoskeleton before, but the way he’s approaching the material that the skeleton is made of, and the way he’s configured it, is what really brought it all together,” Fiechter said.

Race cars have been built around steel-frame skeletons for years, and the technology has even been tried in street-legal vehicles. The problem is that putting together a conventional steel frame requires lots of welds and lots of time, which translates into expense.

Tovar’s design gets around this problem, at least in theory, by positing the use of large-scale additive manufacturing, known colloquially as 3-D manufacturing. Instead of milling, say, an engine component out of a piece of solid metal, an additive-manufacturing device builds up the piece by laying down layer after layer of material. Using this method, it can rapidly create a “real world” version of a component that exists only as a computer file.

If the rib-cage frame were built, it would weigh 295 pounds, making it 10 percent to 20 percent lighter than the frame of a comparable five-passenger car such as the Honda Fit. While a detailed design hasn’t been completed, the final curb weight of the vehicle would be 2,400 to 2,500 pounds. A Honda Civic weighs 2,700 to 3,000 pounds.

Tovar would use additive manufacturing to cast his car frame in one piece. Actually, 3-D manufacturing is a necessity; humans simply can’t make the product he’s designed—a latticework that draws much of its strength from an internal structure of myriad tiny, walled cavities that mimic the interior of human bones.

“Additive manufacturing definitely makes sense with a structure this complex,” Fiechter said. “That’s definitely where he’s deriving some of his strength-to-weight savings.”

Additive, or 3-D, manufacturing builds a component by applying material a layer at a time. The technology is not yet cost-effective for something as large and complex as a car. (IBJ photo/Eric Learned)

Tovar has put his winnings toward further research. And there’s lots to do—everything from testing the crashworthiness of various components to harmoniously combining the plastics and metals in its design to, someday, building the actual car.

“I want to do all the tests, from materials to a full-sized vehicle,” he said. “If I make a vehicle that’s 3-D-printed, I want to make sure I feel safe to have my family inside it.”

But there’s quite a ways to go before WaterBone hits the streets. The additive-manufacturing devices necessary to build something so large and complex aren’t quite here yet. Or at least not for anything approaching a reasonable price. Tovar estimates the cost of printing 1 cubic inch of stainless steel at $40 to $80, with aluminum alloy (his preferred material) running 40 percent higher.

“The cost of producing the first prototype of the rib-cage frame has been estimated at $212,047 using current cost of metal and plastic 3-D printing,” he said. “The cost of a commercial version should be one-tenth of that.”

The machines are on their way, however. Additive manufacturing has been described as a new industrial revolution, with the process applied to making everything from chocolates to rocket motors to transplant-ready human organs.

Some of the biggest adopters of this technology are car makers.

“The automotive industry is trying to reduce the weight of vehicles to meet emission standards,” said John Sprovieri, editor-in-chief of Assembly, a magazine for engineers working in manufacturing. “They’re looking for any edge they can get in that regard.”

Additive manufacturing has been around a couple of decades, used mainly to make prototypes—which then were manufactured in mass quantities in the usual way, using molds and tools. These days, however, the 3-D machines have gotten larger and faster, and are able to handle myriad new materials.

“They’re finding that the technology can be used to make production-ready parts,” Sprovieri said. “Parts you can actually use in a product. Right now, the machines for making large-scale auto parts for a reasonable price aren’t available. But that could soon change.”

Tovar seeks to hasten that process by helping to develop efficient, cost-effective ways to build his dream car. He holds no illusions about offering his vehicle as a production model. It’s a thought experiment, designed to pave the way for more advancement.

“If we can develop these additive-manufacturing processes on a large scale and using multiple materials,” he said, “we can expand the possibilities of vehicle design and make them both lightweight and safe.”•