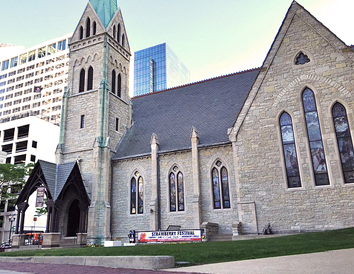 Judge Larry McKinney threw out all three remaining counts against financial powerhouse JPMorgan Chase and Co. and two of the three counts against its banking unit, Chase, which became trustee in 2004 after acquiring Bank One.

McKinney faulted the church’s attorneys at Pence Hensel LLC for lumping together disparate JPMorgan units and referring to the parent company interchangeably with the bank. In addition, he dismissed a constructive fraud claim against the bank on the grounds the allegations lacked specificity, and he dismissed a claim alleging violations of the Indiana Securities Act on the grounds the church lacked legal standing.

“The church cannot allege that it was involved in any transaction in any way because it admits it has no investment authority with respect to the trusts; therefore, it cannot state a cause of action” under the securities act, McKinney wrote.

The judge gave the church the opportunity to file an amended complaint that attempts to address his concerns regarding claims against JPMorgan Chase & Co. and the constructive fraud claim. But he said the church cannot refile the Indiana Securities Act claim.

Church attorney Linda Pence said in an email that Christ Church will refile the lawsuit, buttressed by new information regarding JPMorgan Chase & Co. that came to light after the church filed its complaint in August 2014.

“Since that time, state and federal regulators investigating JP Morgan have disclosed additional information about the bank's practice of selling its own products to clients,” she wrote.  “Consistent with the court's order, Christ Church will file an amended complaint outlining JP Morgan's improper handling of the Church's investments.”

Christ Church’s suit covers 2004 to 2013, when Chase gave up management of the trust accounts. Much of the complaint focuses on the bank’s repeated investments in JPMorgan proprietary products, including hedge funds, “structured notes” and other high-fee, opaque investments. By 2009, the suit says, three-quarters of church assets were invested in JPMorgan proprietary products.

“On many of the financial products purchased by JPMorgan from itself on behalf of the church using church funds, JPMorgan made substantially more money than the church, even though the church trusts bore all the risks of the speculative investments,” the suit says.

The trust funds at issue date to the 1977 death of Eli Lilly Jr., grandson of the pharmaceutical firm’s founder, whose will divvied out 10 percent of his remaining estate to the church, where he was baptized and attended his entire life.

In court papers, attorneys at Faegre Baker Daniels representing JPMorgan Chase and the bank have argued the suit paints a "grossly inaccurate picture" and that the trust accounts actually were managed well.

“Contrary to the Church’s allegations of fraud and mismanagement, the Bank achieved positive returns for the Trusts through one of the worst financial crises in United States history.”

The bank asserts that, even though the church withdrew more than $13 million between 2006 and 2013, the trust accounts nonetheless increased in value by more than $10 million in that span.