The Federal Home Loan Bank of Indianapolis, commonly known as a private-sector bank for banks, announced July 17 that it awarded $10 million in affordable-housing grants in Indiana and Michigan, including two $500,000 grants for projects in Indianapolis. 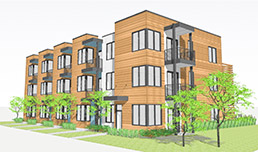 The grants will help finance 22 initiatives covering 538 housing units, officials said, including Oxford Flats in Indianapolis. The 15-unit project near Rural and East Washington streets is being managed by the Englewood Community Development Corp.

FHLBI, which is owned by its member financial institutions, each year donates 10 percent of its net income in the form of affordable-housing grants for projects targeting people and families whose incomes are 80 percent below median levels.

Its members—banks, credit unions and insurers—partner with local not-for-profits, economic development groups or developers to compete for these grants, the FHLBI said. It had 45 grant applicants competing for this round of funding.