Those two plans have been growing recently but have had to record millions in losses to do it. Advantage and IU Health Plans even talked about merging back in 2013 before talks broke down.

Now, Indianapolis-based Anthem’s advantages in size and resources are set to grow even larger after the insurer announced July 24 it will buy Connecticut-based Cigna Corp. for $54.2 billion in cash, stock and debt.

Experts say the deal will give Anthem an even greater edge over smaller rivals in negotiating leverage with hospital systems and in resources to invest in consumer-friendly technology and marketing.

The combined Anthem and Cigna would create a company with more than $115 billion in revenue and $5 billion in profits. Just in Indiana last year, Anthem reported revenue of $4.9 billion and profit of $389 million.

But the leaders of those plans say the future of health care is in their favor, not in the older model mastered by Anthem, which negotiated the largest discounts with providers and then sold access to them to employers.

The future, spurred on by changes from Obamacare, will hinge on close collaborations between health plans and providers that reward doctors and hospitals for keeping patients healthier—and their medical spending lower.

“That’s what we’ve been doing for years,” said Vicki Perry, CEO of Indianapolis-based Advantage, which is owned by St. Vincent Health, Franciscan St. Francis Health and two other hospital systems. She expects the consolidation of Anthem and Cigna, as well as a $37 billion deal that would unite Hartford-based Aetna Inc. and Louisville-based Humana Inc., to open up gaps in local markets.

“The mergers, if approved, we believe that this could create a lot of good opportunities for growth in the small to midsize groups,” she said.

Maybe so, but the first year of Obamacare’s reforms to the health insurance market were not kind to Advantage and its peers.

Advantage recorded a loss of $10.7 million, according to its annual financial filing with the Indiana Department of Insurance. Advantage had also lost $9 million in 2012.

Those losses forced St. Vincent and Franciscan to each pour $6 million in cash into Advantage last year. Messages left for representatives of the hospital systems were not returned.

“The infusion from our partners just shows their commitment to our strategy,” Perry said.

That strategy has involved doubling the size of its Medicare Advantage population over the past two years, to 22,500 seniors.

Medicare Advantage is an alternative to traditional Medicare in which the federal program pays private insurers to handle the health benefits of seniors that choose their plan. More than three of every 10 Medicare beneficiaries are now covered by such plans. 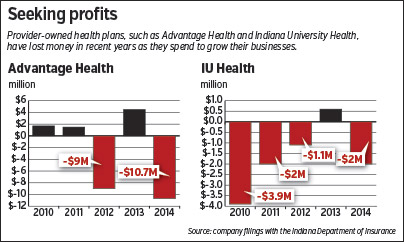 But ramping up its Medicare business comes with temporary financial challenges, Perry noted. When a health plan first signs up a Medicare Advantage customer, the Medicare program assumes that person will have modest medical spending. Perry estimated Medicare’s initial payments are about 70 percent, on average, of what members truly cost to insure.

It takes Advantage about 18 months to fully document that its members have more illnesses than the Medicare program assumed, and to get “true up” payments to cover the extra services needed to treat those illnesses.

The other problem is Obamacare’s new taxes on health insurers. Advantage shelled out a whopping $8.3 million for those taxes for 2014.

Some of that stems from the 50,000 Hoosiers Advantage insures. (It also handles another 36,000 Hoosiers in self-funded employer health plans, which are taxed separately.)

But a lot of those taxes come from Advantage’s Medicare customers. Medicare rules do not allow Advantage or other health plans to include those taxes in its pricing for Medicare Advantage until after it has already paid them.

For a plan like Advantage that is growing its Medicare business, that means a lot of new customers whose premiums aren’t covering the Obamacare taxes.

“It’s difficult to get ahead of that,” Perry said.

IU Health also took a large hit from Obamacare taxes, paying nearly $1.8 million, according to its annual financial filing at the Indiana Department of Insurance.

That fee, along with increased investments to launch into new markets, led IU Health to a $2 million loss in 2014. IU Health spent more on marketing to launch itself onto the Obamacare exchanges in three small Indiana markets and to start growing its presence in the employer market.

It seems to be working. IU Health’s employer accounts have grown from 50,000 people to 80,000 since last year. It added 1,600 Medicare Advantage members last year, boosting its total to 10,400. And it signed up 1,200 more customers on the Obamacare exchanges this year.

For 2016, IU Health Plans is growing its Medicare Advantage plan from 33 counties to 75. And IU Health Plans is expanding its Obamacare exchange presence from 17 to 62 counties—including the Indianapolis area. On the exchanges, IU Health Plans also requested a 16.5-percent price cut that, if approved, would make them about 11 percent cheaper than market leader Anthem.

Last, IU Health Plans is planning a big push into the employer market next year. Its message is that, by choosing IU Health’s narrow network of providers (which includes IU Health facilities as well as some independent practices, such as Indianapolis-based American Health Network), IU Health Plans can keep patients healthier and spending less.

“Because we don’t include the universe of all available physicians, it’s much easier for us to engage them in programs that lead to these results,” said Jim Parker, president of IU Health Plans.

By contrast, large insurers such as Anthem and Minnesota-based UnitedHealthcare have typically offered broad-network plans that include nearly all doctors and hospitals. That has appealed to employers, giving Anthem and United large market shares and the big brand names that go with that, as well as huge negotiating leverage with doctors and hospitals.

Anthem’s combination with Cigna could boost its negotiating leverage even more and, the companies hope, give them the numbers needed to invest in the resources to keep patients healthier. That could include expensive IT tools for patients. Or it could be the myriad medical specialists necessary to manage care for patients with diabetes, heart disease, mental health issues or cancer.

“If we thought they had an advantage before in terms of investment, now that they’ve doubled their size, think what that means,” said Dhan Shapurji, an Indianapolis-based health plan consultant for Deloitte.

That said, he thinks provider-owned plans can save money via narrow networks and managing patients’ health and—if they do that successfully—could negate the size advantage of the big players. It’s just not clear yet which set of offerings will get traction in the marketplace.

Fort Wayne-based Physicians Health Plan of Northern Indiana is betting it can keep costs down with a mix of efforts to keep patients healthier, partnerships with hospitals that want to keep some of their business out of Anthem’s hands, and technology companies that are trying to develop solutions for small health plans.

“I’m hopeful that’s how we’re going to be able to compete,” said Mike Cahill, president of Physicians Health Plan. “Just trying to slug it out with Anthem and United head-to-head, that’s a losing proposition.”•