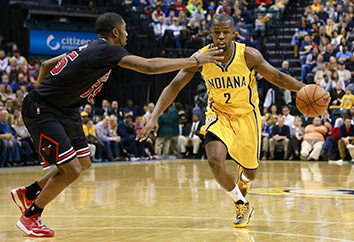 But the plans could also bring other teams—especially the Chicago Bulls—crashing into the central Indiana market hunting for fans and sponsors.

The proposals relate to a rule that bans teams from marketing outside a 75-mile radius of their home base—a limit that keeps the Pacers out of nearby cities like Fort Wayne, Louisville and Cincinnati.

Marc Ganis, president of Chicago-based SportsCorp Ltd., a consulting firm that counts several teams as clients, said the change could allow teams including the Pacers to add annual revenue in the low-seven figures.

“These are bottom-line dollars,” Ganis said. “These are dollars that help the small-market teams compete with the big-market teams. So this is a big deal.”

At last month’s NBA Board of Governors meetings in Las Vegas, owners considered three possible expansions to the rule. Changes would allow teams to market:

— within their entire home state.

— to their home state plus 150 miles beyond those borders.

— in a region defined by their television markets.

A source within the league said the discussions are “sensitive,” and league officials in New York have asked team representatives to stay mum for now. Pacers officials declined to comment for this story.

“This issue bubbled up from the teams. A lot of them want this. But there is still concern about increased overlap of the teams,” Ganis said. “The teams definitely don’t want to spend a bunch of money in a marketing war with other teams.”

A change requires a vote by the league’s 30 team owners. And while league sources say momentum is building for the proposals, they wouldn’t likely be enacted until the 2016-2017 season at the earliest.

The Pacers’ marketing area could expand dramatically. Their TV market covers all of Indiana, except the far northwestern corner. It also reaches into downstate Illinois and eastern Missouri—including St. Louis—and parts of Iowa. But the NBA’s 75-mile rule covers only about the middle third of the state, putting Evansville, Fort Wayne and South Bend out of bounds for the Pacers sales and marketing staff—even though those cities aren’t in another team’s territory. The same applies to Louisville and Cincinnati.

Worse yet, some team officials say, sponsors with a statewide or regional presence can’t use an NBA team’s logos outside the immediate marketing area. For instance, if the Pacers signed a deal with a company that has offices in Indianapolis and Louisville, the team couldn’t use Pacers-branded marketing in that southern region. That, team marketers say, has limited their ability to sell sponsorships and in some cases reduced their value.

The restriction was put in place decades ago to prevent teams in tightly bunched areas from treading on one another’s turf. But some owners are now squawking that it needlessly limits their regional marketing opportunities.

Teams in small markets like Charlotte and Indianapolis have lobbied for years for change. The NBA’s salary cap is expected to explode in the next two years, and while shared broadcasting revenue is also projected to increase, small-market teams say they need every dollar they can get to keep up with big-market teams like the L.A. Lakers and New York Knicks.

And, according to sources close to the talks, the teams have argued there is just too much territory that falls outside any team’s 75-mile radius. A Twitter map—which analyzed the locations of users who follow NBA teams’ official feeds—shows fans outside anyone’s marketing reach typically follow the most successful large-market teams, including the L.A. Lakers and the Miami Heat.

The Pacers are the poster child for potential beneficiary of relaxed rules. The nearest team directly west of the Pacers is the Denver Nuggets and the nearest teams south are the Memphis Grizzlies and Charlotte Hornets, all hundreds of miles away.

“If you let a team like the Pacers market in areas like Louisville and St. Louis,” said Mark Rosentraub, a University of Michigan professor and author of several books on professional sports operations, “it could turn some fans and really make a difference for that team.”

And while the Chicago Bulls lurk to the north, there is still much untapped ground outside both teams’ 75-mile radius, even in Indiana.

Small-market team owners aren’t the only ones pushing for change. Two league sources told IBJ that NBA Commissioner Adam Silver favors expanding the marketing areas. Silver, sources said, sees the change as a way to broaden the NBA’s reach nationwide. His predecessor, David Stern, also was in favor of the move, those same sources said.

“With the Internet and social media, those marketing lines are blurred already,” said Milt Thompson, president of local sports marketing firm Grand Slam Cos. “It’s been proven, the more you let capitalism and free-market principles work, the more the league’s brand expands.”

The Pacers have another potential marketing advantage, besides distance from other NBA teams in three directions. They are also one of the few teams to use a state’s name rather than a city’s. One of the Pacers’ marketing slogans is “Indiana’s Game, Indiana’s Team.”

They could also dovetail off the huge fan bases the Indianapolis Colts have already built in places like Fort Wayne, Evansville and border cities in Ohio, Illinois and Kentucky, where there’s a big following in Louisville.

The NFL, like the NBA, places marketing limitations on its teams, but they’re not quite as restrictive. An NFL team without an in-state competitor can market to its entire state—unless it brings them within 75 miles of an out-of-state team’s home market.

The NFL also allows its teams to have radio affiliates outside the state and grants exemptions to sell to certain markets with no other nearby teams. For instance, the Colts have permission to market to Louisville.

Ray Compton, who helped the Colts carve out a regional following as the team’s senior vice president of sales and marketing from 1997 to 2005, said the Pacers could realize a “huge benefit” from a change in the regulations.

“In Indiana, because of the market size here, you have to market to the entire state, and if you can creep into east central Illinois or west central Ohio, you’d be crazy not to,” said Compton, who served as the Pacers vice president of sales and marketing from 1982 to 1988. “The NBA right now is on a roll, and this change could put the Pacers in a great position.”

The proposed rule change would also give teams a big boost with regional and national brands and give local advertisers with a presence outside the immediate area “a much more lucrative deal to consider,” said Compton, who now runs event management firm Compton Strategies.

There is one big potential downside for the Pacers to consider. If the NBA allows teams to market 150 miles beyond state borders, that could bring the massively popular Chicago Bulls charging into the Pacers’ back yard. It could also cause a market battle along the Illinois-Indiana border and in northwestern Indiana.

While NBA owners remain “super sensitive” about the potential conflicts, Ganis said the Pacers would have much more to gain than lose.

“The Bulls already sell out their arena and have a very strong sponsorship base,” Ganis said. “They have a huge mass of people and companies to sell to within the Chicagoland area, so I think they’ll be content there. I don’t think it makes sense for them to spend money to come down and get into a marketing battle with Indiana.”

But the Pacers, who have far fewer people and corporate headquarters nearby, he said, “would benefit greatly from more regional marketing”•