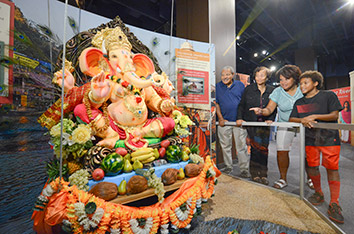 Luis, a Christian, treks to see the shrine of Our Lady of Guadalupe in Mexico City. Micah, who is Jewish, yearns to see the Western Wall in Jerusalem. Amala, a Hindu girl from India, journeys to the Bodhi Tree. And Hana, a Muslim, goes on a Hajj to Mecca.

They aren’t alone. We are told that 330 million people each year journey to places they find sacred. And the striking images of large crowds on such pilgrimages leave little reason to doubt that number.

From the beginning, the exhibit text makes it clear that this quartet doesn’t represent every faith and that a single exhibit is inherently limited. Still, it allows for side trips as we follow these journeys. In and around the displays focused on the conclusions of the aforementioned quests, we see a throne created for the Dalai Lama when he visited Bloomington in 2010, fragments of the Dead Sea Scrolls, a tile piece from the Dome of the Rock, a 1,300-pound block from the Temple Mount, ritual objects that astronaut David Wolf took with him to the International Space Station, a signature from Martin Luther, and more.

It’s refreshing to see a large-scale exhibit such as this at The Children’s Museum (where such serious-minded exhibitions can seem dwarfed by pop-culture tie-in shows). With very limited interactives and little to lure in younger kids, “Sacred Journeys” might not be the most crowded part of the museum during an average day, but it’s a worthy addition to the CM menu. 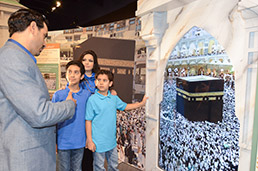 (Photo courtesy of The Children’s Museum of Indianapolis)

Most of what’s here is unlikely to stir any controversy, since the designers have been careful about verbiage. “We believe Buddhism began …” and, “My mother believes …” dot the text and audio. The only section that might raise some eyebrows is a wall dominated with a replica of the Shroud of Turin, the burial cloth that some believe miraculously carries the image of the crucified Jesus Christ. (Barrie Schwortz, a researcher who runs a website supporting this belief, will speak at The Children’s Museum on Sept. 19. In the interest of full inquiry, it would have been nice if the organizers had arranged this as a debate rather than a lecture, given the questionable nature of much of the evidence.)

The underlying message of “Sacred Journeys” is that the world is filled with people of different faiths. The implied message is that not everyone believes what you do—and that’s OK. Kids might ask what Martin Luther was doing hammering a note to a church door, but the exhibit steers clear of controversial questions by avoiding material that pits one set of religious beliefs against another.•