The Eiteljorg Museum of American Indians and Western Art has received a “nationally-significant collection” that will make a “profound impact” on the institution, John Vanausdall, president and CEO of the Indianapolis museum, announced Wednesday.

Kenneth S. “Bud” Adams, late owner of the NFL’s Tennessee Titans, left the multi-million-dollar collection of Western paintings and Native American artifacts to the Eiteljorg in his will. 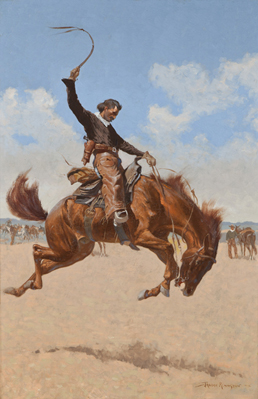 Frederic Remington's "A Buck Jumper" from 1893 is among the works gifted to the museum. (Image courtesy Eiteljorg Museum of American Indians and Western Art)

The Eiteljorg did not disclose an estimated value for the collection, but works by Remington, Russell, Wyeth and Moran have sold for millions of dollars.

The museum called the donation “one of the largest and most important gifts of Western and Native art the Eiteljorg has received since its founding in 1989.”

The “Kenneth S. ‘Bud’ and Nancy Adams Collection” was formerly housed in the Adams’ Houston home and office. In addition to owning the Titans, Bud Adams was a founder of the American Football League (now American Football Conference) and former CEO of Houston-based oil company Adams Resources & Energy.

Adams had ties to Indiana as a graduate of the Culver Military Academy in Culver.

“The Eiteljorg Museum is one of the premier museums of Native American artifacts and Western art in North America, and it is appropriate that these priceless treasures will be housed at the Eiteljorg permanently,” said Titans owner Amy Adams Strunk, daughter of Bud Adams, in a written statement. “This collection was very special to my father, and our family hopes that those who view these items on display will walk away with the same sense of wonder and appreciation for the culture and heritage that these unique artifacts and works of art represent.”

The Eiteljorg will begin displaying select paintings from the collection over the next several months. It plans a major exhibition of the collection from November 2016 through January 2017.