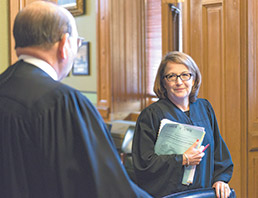 That’s because the timely, efficient and fair administration of justice requires a whole lot of paperwork. Rush—chief justice of the state Supreme Court—is on a mission to change that by spearheading an effort to make Indiana’s court system paperless within three years.

Hamilton County became the first county to implement e-filing for civil cases this year. The rest will occur incrementally.

It’s a paradigm shift for some judges who have been reading stacks of briefs their entire careers. Rush, 57, gets it: She reads several ink-stained newspapers each morning. But she said switching to e-filing will make the court system better.

How will a statewide push for e-filing make a difference in how the courts run?

We were behind the curve. At the Supreme Court, there’s about half my body length in cases we do each week, and I’m just one judge. It’s going to be a watershed moment when we go paperless. I’ll be soon reading all cases electronically, and I’m fine with that. We think it’s important that we embrace it.

Earlier this year, you announced Indiana is studying the creation of a business court. How could businesses be better served now in Indiana’s court system?

In often-busy courts, commercial litigation can sometimes lag. One thing we know in looking across the country is that businesses [decide] where they do business based on the court system. We want to make sure that we are at the top of the pack. We’ve really ramped up moving this project forward and given it the priority it’s due.

Last month marked one year since you became chief justice of the Supreme Court. What’s your leadership style?

It’s very collaborative. The strength of the Supreme Court is the collective work of all five justices. When I was a trial court judge in Tippecanoe County, you couldn’t look over your shoulder and bounce something off anybody. We work extremely well together.

Is the job different than you expected?

Probably more than half my time is spent running the business of the courts of Indiana. I knew it was a lot, but until you’re doing your fourth budget hearing …

One thing I really like about the job is delving into areas of law that I hadn’t practiced and studying them. I can really break down a Tax Court case or an environmental case. I like the challenge.

Perhaps your most permanent impact on the law is the opinions you write. What’s that like?

I love it. I thought it was going to be painstaking, but no. I spend a lot of time morphing my decisions down into something that can be read and understood with main points. I think I’ve done over 20 versions of some of my opinions. You can’t have a throwaway line.

When I first started, I had a lot of suggestions for changes. I went to talk to former Chief Justice Brent Dickson. He said, “You don’t need to do it all today. Sometimes, change is slower.”•