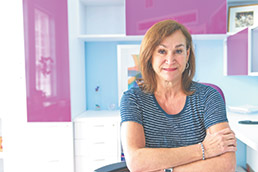 It’s not an easy task, but 57-year-old Cindy Simon Skjodt tries to limit the number of organizations she helps, so each one can get the attention it deserves.She has been involved in philanthropy most of her life—following the influence of her late father, billionaire shopping-mall tycoon Melvin Simon—and created the not-for-profit Samerian Foundation in 2003 to give back to the community. She focuses on issues that inspire her, including human and animal rights, sports and at-risk youth, but struggles to name the project that has been most meaningful. Still, Skjodt says a recent $20 million donation to the U.S. Holocaust Memorial Museum stands out because of her passion to prevent genocide.Her foundation has donated $93 million to more than 3,700 requests, but Skjodt isn’t slowing down. She still has a long list of local, national and international problems to tackle.

Has there ever been a project or organization you donated to and later regretted it?

No. I’m very picky about what I get involved in.

We get grant applications at the Samerian Foundation all the time for some real crazy things. One time, somebody wanted us to help her pay for her divorce lawyer.

In 2013, you announced you would donate $40 million to renovate Assembly Hall at Indiana University in Bloomington. What did that mean to you?

It was sort of like a no-brainer. Some of my fondest memories of my father are at Assembly Hall.

We’re so connected to the university [17 family members either graduated from IU or are attending]. It was something that we’re really proud of, but something we knew we needed to step up for.

Was it your preference to renovate the 42-year-old basketball arena instead of constructing a new building?

Absolutely. There’s a rumor going around that I wanted to tear it down. Hell no. No. It’s iconic. It’s one of the greatest college sports venues in the world. Why would I want to see it torn down? Never, ever.

You’ve also been involved in politics, showing support for Democratic presidential front-runner Hillary Clinton, whom you recently hosted at your house in Carmel for a campaign fundraiser. Tell me about that.

I was talking to her about mental health issues [and] she listened to me talk for about 10 minutes, just the two of us. I thought, “Wow, that’s really engaging of her considering she’s got all this other stuff going on.”

I’ve always been a big Democrat. I had Bill Clinton stay at our house when he was actually campaigning for [Hillary] when she was running for senator. He was still sitting president. That was amazing.

They have the same concerns that I do. Politics is hard because it’s hard to accomplish what you want because you have two different parties who fight all the time.

I’m hoping that one day—maybe with this next generation—we can change that a little bit and not worry so much about special-interest groups. Whether you’re a Republican or a Democrat, you have to step up and decide that you’re tired of the rhetoric.

What do you specifically like about Hillary’s presidential campaign?

She knows about women’s issues. She’s talked about mental health, gun control, gay and lesbian issues, which are important to me, too. I think people should be allowed to be with whoever they want to be with, no matter what.

I know this sounds really liberal, but I think these are just natural moralistic obligations that we should take care of. It doesn’t matter what your political party is.

Because it’s too one-way. It’s too Republican, and it’s hard to get elected as a Democrat in the Legislature.

That’s why I think our political system needs to be re-evaluated, because if you’re not in the majority, forget about it. It’s tough to get anything accomplished, and sometimes what they get accomplished is not too good.

Someone once asked me if I would run for office, and I said, “Are you crazy? Why would I put myself through that and then get frustrated all the time? No.”

I’m kind of an anomaly, especially in Hamilton County. When it comes time to vote, which I always do, it’s hard when you pull up the ballot and all you see are people you don’t want to vote for.

I hate to be labeled as a Democrat or a Republican. It’s just what I believe. If that makes me a Democrat, so be it.