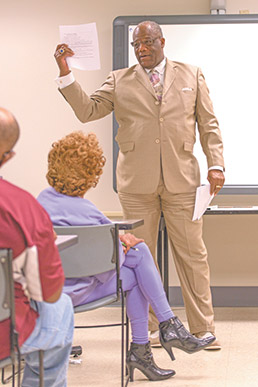 Eugene White, former superintendent of Indianapolis Public Schools, is now president of Martin University, a black liberal arts college on the east side of Indianapolis.White, 67, was hired in 2013 to stabilize the university, which had seen a string of presidents come and go since the retirement of its co-founder, Catholic monk Boniface Hardin, in 2007.White had to cut several teachers and staff members—and even cut his own pay by $50,000. But the university is now raising faculty pay, working to start a teacher training program, and even dreaming about Martin’s first doctoral program.

What made you take this job?

I had been officially retired for about three months and was consulting for a company out of suburban Boston. I was somewhat bored. I had done all the honey-do things that I needed to do and wanted to do. I was really focused on relocating [to Atlanta] and getting closer to relatives in the South.

The thing that got me to come was that I knew [the late] Father Hardin and respected him tremendously. The first time I met him, he was trying to raise money to make payroll. I had met a lot of people that had graduated from Martin and they would not have graduated through the traditional universities, colleges and programs.

Describe the situation Martin was in when you arrived.

It was totally unstable. You’ve got to have a certain score on the CFI [Composite Financial Index] if you’re going to qualify for federal [student loan] funds. You’ve got to be at 1 to be on warning. You’ve got be at 1.5 to be stable. And the highest you can get is 3. But Martin was at 0.6 when I walked in the door.

The only thing that keeps us on probation [with the Higher Learning Commission, an accrediting agency] is that we don’t have a financial reserve. They said we needed to have enough money for two to three months of operation, without any new income. That amounts to between $800,000 to $900,000. We have to try to get that done. And if we could, we really need an endowment for the university. Ideally, we need an endowment, from $2 million to $10 million.

How does being on probation hurt Martin?

The average age of a student at Martin is 38.7 years. The niche that we used to have a pretty good handle on is that older student. Now, Marian University, [University of Indianapolis], everybody’s going after older students. And now, we have to go after younger students. [But] many [high school] counselors are hesitant to talk to their students [about a university on probation].

The other problem we have with younger students is that we are a commuter university, with no swag. By swag I mean, we don’t have a gym, so we don’t have basketball teams and a volleyball team. Therefore, we don’t have cheerleaders, we don’t have dancers. One of the things we want to do is build a [$30 million] student fine arts and activity center. Because we’ve got to have a gym.

Where should Martin’s enrollment be to be financially healthy?

Ideally, we would like to be a university between 500 and 800 students [current enrollment is 350]. We just want to be the small liberal arts university that serves the needs of the traditional and non-traditional student. Every student here has a faculty mentor. And our faculty doesn’t have to publish or do research per se, but they have to put in service.

The irony is, the population is getting more diverse and the teaching population is getting less diverse. We would like to have a small school of education, producing teachers from pre-K through grade 5 only. Because I believe pre-K to grade 5 is the foundation of your success. If we produced 15 to 25 teachers a year who were looking to work in the urban setting, that would be a great contribution.

Martin has 11 bachelor’s programs and two master’s programs. Why do you also want to add a doctoral program?

Urban leadership will be the first doctorate. Why? Because we are finding out that the urban situation is still volatile. We need people who can help do research and can say, “If you have this variable, and this variable and this variable, this is going to happen. So let’s do this to prevent this from happening.” As an urban university, that would be a great claim for us. If you’re going to do something, you need something high to shoot for.