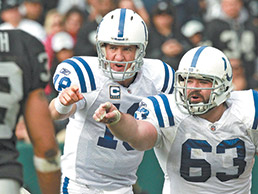 Jeff Saturday, now 40, snapped the Indianapolis Colts football (fully inflated) for just over a dozen seasons. His skills and on-field leadership earned him trips to six Pro Bowls. He and his Colts teammates garnered a Super Bowl Championship ring in 2007.

Not large for his position, Saturday was pound for pound probably the smartest lineman in the NFL. He was named Academic All-ACC at North Carolina and, as a players’ representative, was instrumental in settling the player/owner lockout of 2011. The Saturday to Manning connection was the best center/quarterback pairing in NFL history. Saturday was inducted into the Colts Ring of Honor at the Colts/Jets game on Sept. 21. Hall of Fame honors are likely to follow.

Saturday talked to columnist Mickey Maurer between assignments at ESPN, where he is enjoying a career as an analyst on NFL Live and SportsCenter.

After winning the Super Bowl you met President Bush. Was he more daunting than those 6’7” defensive linemen you had to face from time to time?

That was one of the more memorable privileges in my life—truly an incredible and powerful moment. It was Peyton, Dwight, Marvin, Coach Dungy and I in the oval office with the President and Condoleezza Rice—and they were doing business right before our eyes.

My life has straightened itself out now. It was a different perspective viewing the world from between your legs.

There is at least one other profession that can relate to that “point of view” but let’s move on.

You have said that playing an NFL football game is the equivalent to getting in an automobile accident every week.

It’s like smashing into a brick wall over and over. You are hurting from head to toe. As a rookie, I was ready to go again the next day but as I aged, Thursdays and Fridays found me not quite recovered. It got worse later in the season.

You still suffer from football injuries. Would you let your children engage in a football career?

Sure. I did not let my children play padded football until they were older. Before that they enjoyed the less physical flag football. There is inherent risk in the game, and I have discussed this with my children. You have to learn to manage that risk. If you are injured, don’t play. If there is any doubt, don’t play. My children love football, and I encourage that joy. It was a business for me. It is a sport for them, at least for now, and with my guidance they will know how to evaluate that risk/reward relationship and to be smart.

Do you play fantasy football?

Yes, my sons and I play in a family league with other father/sons and daughters. It is great fun.

What’s the name of your fantasy football team?

Any tips on how to win at fantasy football?

Running backs are the key. Draft them first. Unlike the real draft, where you go after your quarterback, it is the running backs that earn the best return. Two, draft your receivers. Finally, the quarterback.

Who is on your team?

Well, at quarterback we have Tony Romo and Eli Manning.

He was gone by the time we could get to him. We also drafted CJ Anderson, Alfred Morris, LeGarrette Blount, Dez Bryant, Alshon Jeffery.

Can you win the title?

We have big hopes and dreams! The season is just under way and we are very excited.

How has fantasy football affected your job at ESPN and how the game is watched?

Fantasy football has amped up the interest in the NFL. Fans no longer watch just the home team. They are watching many different teams and they become more knowledgeable about the game. They are not just watching the ball. They are watching players and appreciating the skills necessary to excel at various positions. They are learning the nuances of the game.

Indianapolis misses you. You were a fan favorite and front and center as a contributor of time, money and energy to community causes.