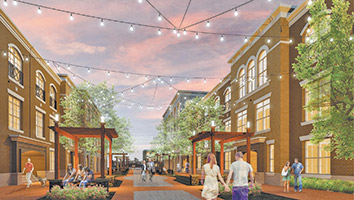 The former Party Time Rental warehouse along Rangeline Road in Carmel has been an eyesore for years, but city officials seem finally ready to approve a proposal that will transform the 6.5-acre site into a gateway community.

The $60 million mixed-use development called “Proscenium” would include six three- to four-story structures surrounding a central plaza with an upscale restaurant, and a 449-space underground parking garage.

Indianapolis-based Anderson Birkla Investment Partners LLC introduced preliminary plans to the Carmel Redevelopment Commission in May, and the project’s financing proposal is headed to the Carmel City Council for final approval.

Corrie Meyer, executive director of the CRC, said the project hits what the city was looking for on the highly visible site—public green space; a variety of residential, office and retail usage; and a way to take advantage of the unusual grade that causes the existing warehouse to sit below Rangeline Road. The new buildings would be raised to street level, while improved sidewalks would make the area pedestrian-friendly.

“I think the attention to detail has continued to evolve this plan,” Meyer said.

Under the funding agreement, the CRC would sell the land to Anderson Birkla for $50,000 even though it purchased the property for $3 million in 2009. Meyer said the low price is to help make up the difference between expected tax increment financing dollars and the cost of infrastructure improvements.

Anthony Birkla, principal of real estate development for the company, estimated the public infrastructure investment at $10.5 million. The CRC is proposing to issue bonds backed by TIF revenue for up to $8 million, but only 75 percent of that–or $6 million–would be available to Anderson Birkla. That leaves a funding gap of about $4.5 million the developer will be responsible for.

Carmel City Council President Rick Sharp said he expects the city administration to delay introducing the project until after the first of the year, when many believe new councilors will boost the mayor’s support.

The development could face opposition from the current council. Sharp said he’s unsure if he’ll support using TIF dollars for it, and he’s uncomfortable adding more rental units in the city.

“I have yet to see any evidence that tells me that the American public, especially in the Midwest, has changed their mind-set that they want to cluster into apartments all of their life,” Sharp said. “I think this is building to a false premise.”

Mayor Jim Brainard said the delay in revitalizing the property is partly because the city purchased the land during the Great Recession.

It took two years before any project was considered for the site, and the property wasn’t rezoned to the “City Center” designation until 2013. That change allows a mixed-use development.

In May 2013, the CRC issued a request for proposals. Indianapolis-based Flaherty & Collins Properties submitted two, but neither appeared to fit the commission’s vision.

“They never made the changes we asked for,” Brainard said about Flaherty & Collins. “We’ve been really particular.”

The six buildings in the development will vary in design and style. One will look like an old warehouse with lofts and a focus on attracting millennials, while another will feature brownstone-style apartments with a goal of leasing to older residents.

“It’s going to feel like it’s been there for a while,” Birkla said about the community. “Each building takes its own flavor.”

Nearly 225 luxury studio, one- and two-bedroom units will be available, along with 6,355 square feet of amenities, including a fitness club, bike area, coffee bar and business center. Monthly rent will range from $800 to $1,900.

Close to 20,000 square feet of retail space will be at ground level, with several buildings offering the opportunity for outdoor seating.

The public plaza will feature a yet-to-be-determined restaurant.

“The green area isn’t just an island in a sea of parking,” Brainard said. “It’s a true piazza. It should be a beautiful space.”

The development plan includes extending Veterans Way south to Carmel Drive and lengthening Executive Drive to intersect with the new portion of Veterans Way. Both streets will serve as entrances to the underground garage, which will have direct access to all the buildings.

When completed, Veterans Way will run from City Center Drive to Carmel Drive. The pond immediately to the west within the Kawachinagano Japanese Garden will not be affected by the new roadway.

Birkla’s designs also show a roundabout at Rangeline Road and Carmel Drive, which the city already has federal funding in place to build. Brainard said he expects construction to start next year.

Another roundabout—at Executive Drive and Rangeline Road—is envisioned, but the city has not set aside funding for that project, nor established a time line.

Sharp said he realizes the city needs more housing for its growing population, and that higher density helps the tax base, but he’s concerned about the increasing number of rental properties.

He said most of the new units are geared toward millennials, but once that generation starts having children, their preferences could change.

The upcoming Midtown project between City Center and the Arts & Design District will also include residential and retail, but Birkla said demand is high enough to fill the space.

“I don’t see City Center or Midtown as competition,” he said. “I think the downtown will be a better place with more people.”

The project does not include the property where fast food chain Arby’s operates, but it could be incorporated in the future, possibly as a corporate headquarters.

Meyer said the city knows it will need part of the property for right of way when the roundabout is built at that intersection, so that could spur a change.

The site north of the development that is primarily office space now could also be added to the project someday.

“This is a spectacular piece of property,” Birkla said. “You only get one shot at it.”•