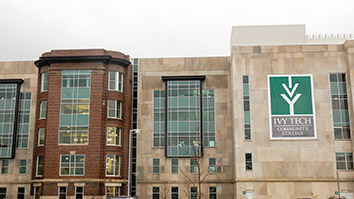 A year after Amanda Parker ended her small marketing firm’s health insurance plan and instead helped her employees buy insurance on their own, she did a quick calculation of how much money her company saved.

Parker, president of Indianapolis-based Collective Alternative, didn’t want to share what that’s meant in dollars. But she did offer this: Her 10-person company hired three new people in the past year, in part because bringing on a new employee didn’t have to come with quite so hefty a contribution toward health insurance.

“It certainly makes it more affordable for us as a small business” to hire, said Parker, who started Collective Alternative in 2008 and runs it with her husband, Ross. “We can offer you a higher salary, because we won’t have to pay as much on insurance.”

Collective Alternative is one of about 200 companies that health insurance brokers in Indianapolis have helped move from traditional employer-sponsored health benefits to what they call an individual strategy.

And brokers expect more to follow suit. Some even think what Collective Alternative is doing is the beginning of the same kind of shift that occurred as employers dropped their pension plans and helped workers sign up for individual 401(k) retirement plans.

“Twenty years ago, nobody knew what a 401(k) was. And today, everyone has a 401(k). We’re going to see that same shift in health insurance and we’re at the beginning of that shift,” said Michael Haffey, the Indiana sales leader for Minnesota-based Gravie, the company that helps Collective Alternatives employees shop individually for health coverage.

Gravie now has more than 100 employer clients in Indiana and works with nearly 1,900 individuals here. At least three-quarters of those used to be on traditional health plans, known as group plans, Haffey said.

Other Gravie clients include Ivy Tech Community College, which hired Gravie to help its more than 70,000 students—whose average age is 29 and who typically work part time without health benefits—shop for insurance.

Other companies are also seeing the trend. Indianapolis-based benefits firm FirstPerson has helped 15 companies make the transition using a service it calls MyChoice. For example, in 2014, FirstPerson helped Indianapolis-based Citadel Architectural Products end its self-funded group health plan and then worked with its roughly 30 employees to find benefits on their own.

“All things being equal, we will continue to see some movement in that direction,” said Mark Minner, a broker at First Person.

Indianapolis-based Nefouse & Associates has worked with 77 companies over the past three years to end their group health plans, while then helping their workers buy insurance on their own.

Insurance broker Tony Nefouse said most of those clients saved 25 percent to 30 percent by making the switch.

The companies that see the biggest savings are those that have employees that qualify for tax subsidies via the Obamacare exchanges. The Affordable Care Act, also known as Obamacare, created online marketplaces for insurance and offers tax credits on a sliding scale for those who don’t have the option of employer insurance.

“Anywhere where you have hourly wage employees is where you see a real benefit,” said Nefouse, who has found retail and hospitality businesses often stand to benefit. “It’s usually a company that has low turnover. It’s also a company that isn’t using a growth model. Relatively, the income is lower for the employees.”

The Obamacare subsidies were key for Collective Alternative. Two of the four employees on the old group health plan it had with Anthem qualified for subsidies on the Obamacare exchange.

But the other reason employers save is because individual insurance premiums—as high as they are—tend to be cheaper than employer group premiums, said Gravie’s Haffey. That’s especially true for younger workers.

“The group plans for the past 20 years have been subject to guaranteed issue. So the group rates kept escalating,” Haffey said. “Then when reform came in, individual rates bumped a little bit, but not enough to keep up with the group rates.”

Parker and her husband saved money that way. They didn’t qualify for Obamacare subsidies, but they found they could buy an individual policy with a lower deductible and a broader network of doctors that still cost less than half as much in premiums as their group plan.

“It just made so much more sense and was a much better benefit,” she said.

Like Collective Alternative, most of the companies ending their group health plans are tiny, with 10 or fewer workers.

Any company with more than 50 workers that does not offer a group health plan faces Obamacare fines of $2,000 per worker.

But even some of those companies are now starting to drop their plans.

CEO Fernando Falcon said he was tired of explaining 18 percent premium increases each year to his employees. He also didn’t like having to make his controller, who is trained as an accountant, spend huge amounts of time handling benefits questions.

Because Champion will pay a penalty for not offering group coverage, Falcon doesn’t expect to save money by making the switch. But he thinks his employees will be able to find insurance coverage that better suits their needs.

“You always try to get the best package possible for our employees, but you can never satisfy everyone,” Falcon said. “Having them be able to make their own choices for their family, that’s a huge benefit for them.”

Falcon intends to keep contributing the same amount of money toward health benefits—although he will do it in the form of wages instead of contributions to a health insurance plan.

The disadvantages of that decision are that Champion’s contributions, while exempt from corporate income taxes, will still be subject to Social Security and Medicare taxes. And the extra wages will be taxable income to employees—which can trigger as much as 40 percent in income-based taxes.

But the advantage of supporting health benefits via higher wages is that the employer can give different amounts to different workers, based on their needs, said Gravie’s Haffey.

But under benefits laws, an employer’s contributions to a group health insurance plan must be equal to all employees—regardless of their incomes or ages.

Brokers are divided on how many more employers will drop their group health plans. So far, many firms have held onto the plans they had before Obamacare rules kicked in.

That’s in part because Obamacare requires new individual and small-employer plans to use a concept called community rating, which means the cost of all insured members in a geographic area are averaged together. Obamacare then mandates that the oldest people in that community cannot be charged any more than three times the premiums of the youngest.

That means companies with younger-than-average workers could face large premium increases. The Obama administration has allowed employers to keep renewing their pre-Obamacare plans until 2016 or, in some cases, as late as 2017. But when those delays run their course, many companies will face large increases.

Nefouse estimates 60 percent to 70 percent increases will be common.

“I don’t care what business owner it is, they’re not going to take that,” he said.

But others aren’t so sure. The individual markets have been unstable, with many insurers losing money. On Nov. 19, industry giant UnitedHealthcare said it was losing more than $400 million on the Obamacare exchanges and might exit those markets, including Indiana’s.

Because of that uncertainty, FirstPerson’s Minner said employers might try to find other options—such as self-funding their benefits or pooling their workers with other companies via something called a professional employer organization, or PEO.

Haffey, at Gravie, predicts the end of those pre-Obamacare plans will cause a flood of employers to drop their group health plans and send their workers to the individual markets.

“The vast majority of all businesses, other than the very, very large businesses, will be in this space over the next five to 10 years,” he said. “I tell businesses all the time: It’s not whether you do this, it’s when.”•