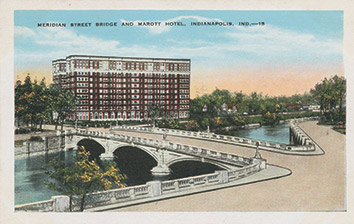 Because its reputation as the “Crossroads of America” dates to the completion of the east-west National Road and north-south Michigan Road in the earliest days of its history, Indianapolis has always offered the traveler lodging, food and drink. That reputation for hospitality beginning in the 1830s has carried into the 21st century as the Hoosier capital city has emerged as one of the most vibrant convention cities in the Midwest.

In the city’s earliest days, lodging typically consisted of room and board at travelers’ inns, either privately owned or operated by coach lines that traversed the state. It wasn’t until the advent of the railroad in the 1840s and 1850s that hotels as they are currently known began to pop up in downtown Indianapolis.

One of the first was Bates House, which opened at Washington and Illinois streets in 1853. The site of a tavern and roadhouse that had been in existence since shortly after the founding of Indianapolis, Bates House was the city’s most exclusive hotel for 30 years; Abraham Lincoln made his first policy address as president in 1861 addressing an estimated 45,000 people from its balcony.

In 1884, the English family opened the English Hotel on Monument Circle, adjacent to the English Opera House; the hotel was expanded in 1896, then torn down in 1948 to make way for a J.C. Penney store.

In 1903, Connersville industrialist Edward Claypool put up the money for a new hotel on the site of the former Bates House; the 450 guest rooms made the Claypool the city’s largest hotel until the 1980s. The Lincoln Hotel began construction at Kentucky Avenue and Washington Street in 1917. The flat-iron building was planned for 15 stories, but wartime building material shortages forced the owners to settle for eight stories when it opened in 1921.

The city’s hotel district began expanding north in 1923, a direction in which it would continue for most of the next century. In 1923, builder Edgar G. Spink erected Spink Arms Hotel at 410 N. Meridian St., one of the city’s first extended-stay, apartment hotels.

Three years later, George J. Marott opened the first suburban hotel in the city at 2625 N. Meridian St. Then situated next to the Governor’s Mansion, the Marott Hotel hosted hundreds of political meetings and conventions over the next two decades.

In the post-World War II era, the city’s downtown hotels entered hard times. In the late 1960s and early 1970s, downtown landmarks like the Claypool, Lincoln and Antlers Hotel were closed and demolished. The end of passenger rail travel and the completion of the interstate highway system through and around Indianapolis created a new lodging dynamic, with chain motels popping up at every interstate exit.

But the redevelopment of downtown, spurred by the addition of professional basketball in the 1970s and professional football in the 1980s, along with the completion of the Indiana Convention and Exposition Center, created new demand for hotels.

The 99-room refurbished Canterbury Hotel on South Illinois Street opened its doors in 1984, followed a year later by the opening of a 360-room Embassy Suites at Washington and Illinois streets on the site of the former Claypool Hotel. The next year, the 276-room Holiday Inn Union Station anchored the city’s redevelopment of its 19th century train station; the hotel—with its railroad motif—later became Crowne Plaza Union Station.

In 1989, the Westin Hotel downtown became the largest in the city’s history, with 572 rooms. In 1990, the Omni Hotel chain renovated and reopened the former Severin Hotel at 40 W. Jackson Place. The reopening added 423 rooms to the downtown hotel mix.

At the turn of the century, the opening of Circle Centre mall and development of White River State Park and Victory Field brought with it the addition of such chains as Comfort Inn, Hampton Inn, Courtyard by Marriott, and Residence Inn by Marriott to the downtown hotel scene.

Redevelopment continued in the new millennium. The opening of Bankers Life Fieldhouse at Georgia and South Pennsylvania streets in 1999 and the replacement of the RCA Dome by Lucas Oil Stadium in 2008, along with the city’s emergence as a convention destination, created demand for even more downtown hotel rooms in the 21st century. The opening of The Conrad Indianapolis, Hyatt Regency Indianapolis, Indianapolis Marriott Downtown and JW Marriott Indianapolis added several thousand high-end rooms.

In the second half of the 20th century, Indianapolis became a tourist destination in and of itself. Besides its professional sports offerings—including the Indianapolis 500, Indianapolis Colts, Indiana Pacers and Brickyard 400—the city boasted such world-class attractions as The Children’s Museum of Indianapolis, Conner Prairie Interactive History Park, Eiteljorg Museum of American Indians and Western Art, and the NCAA Hall of Champions.

For much of the post-war era, Indianapolis was a meat-and-potatoes town when it came to dining out. Convention-goers had several downtown eating spots to choose from; cafeterias were always a favorite. Besides Laughner’s and MCL—both Hoosier institutions—Russett Cafeteria on Meridian Street and the Guaranty Cafeteria in the basement of the Guaranty Building were popular.

All the downtown hotels boasted full-service restaurants, and the city’s two downtown department stores—Block’s and Ayres—had tea rooms that did a booming business when conventions and meetings were in progress.

The Claypool Hotel on the site of the Bates House at Washington and Illinois, seen here in 1904, was the city’s largest lodging establishment until the 1980s.

Several downtown steak houses were on the itinerary of any convention visitors. Hotel row on South Illinois Street included St. Elmo’s—still one of the top convention draws—and Joe Star’s Restaurant a block south. Stiegemeir’s on South Pennsylvania and the King Cole, just south of the Circle, often had crowds for dinner. Fendrick’s Restaurant at Market and Illinois was a popular spot, as was Miller’s Restaurant on the ground floor of the ISTA Building in the 1960s.

Visitors to Indianapolis were sometimes surprised to discover the Hoosier capital had several outstanding delicatessens. Shapiro’s on downtown’s south side has been a city institution for decades, and most Hoosiers swore by the hot ham sandwiches at Weiss Deli on Washington Street. Sam’s Subway on Meridian Street just north of Fall Creek Parkway was a popular spot in the 1960s.

Ethnic food was harder to find. The Mandarin Inn on the Circle was one of the city’s first popular Chinese restaurants, and Iaria’s and Milano Inn—a block apart on South College Avenue—have been serving Italian food for decades. Later, Macri’s Italian Village opened on North Meridian Street within walking distance of the Marott Hotel. Acapulco Joe’s on North Illinois Street popularized Mexican cuisine in the 1970s.

The aging of the post-war baby boom helped create a “foodie” culture in Indianapolis in the 21st century that has yet to run its course. Non-chain restaurants have clustered in districts like Massachusetts Avenue, Fletcher Place, Broad Ripple, SoBro and Irvington, giving convention-goers and residents alike opportunity to sample cuisines undreamt-of in the Hoosier capital city just a generation ago.•