Home » Artisan distilleries are on the rise since 2013 law change 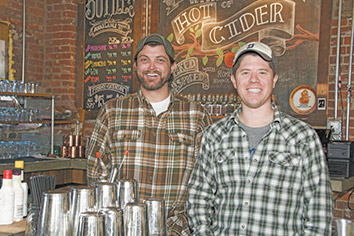 Nationally, the craft distilling industry is growing rapidly. Here in Indiana, though, it’s just getting started.

“It’s not like the microbrewery business, where it seems like there’s one opening every week,” said Stuart Hobson, owner of Heartland Distillers, which has operated a wholesale distillery out of a strip mall near East 96th Street and Hague Road since 2008.

“The distillery business is a little bit tougher nut to crack. When you make a product that sells for $30 or $40 a bottle, it’s not like buying a six pack of beer for 10 bucks. It’s a little harder to get people to fork over the money and try you.”

Until recently, craft distilling wasn’t just a tough nut—it was illegal. Entrepreneurs couldn’t open a distillery that sold retail to the public the same way a winery or microbrewery does. That changed in July 2013, when a new state law cleared the way for licensed artisan distillers to produce no more than 10,000 gallons of spirits (vodka, gin, whiskey, etc.) for sale by the drink, bottle or case from the location where the liquor was made.

The move allows Indiana to grab a piece of the exponentially growing craft distilling market. In 2000, there were only 24 such operations in the United States. The number rose to 234 by the end of 2011, and 580 in 2014.

So far, Indiana has issued 13 artisan distillers licenses, and three more are in process.

One of the early movers was Hotel Tango Whiskey, which opened in August 2014 at 702 Virginia Ave. Not far behind will be Broken Beaker Distillery, which will open a 3,400-square-foot operation in January at 643 Massachusetts Ave.

The distillery, which will make and serve everything from liqueurs to brandies, has been gestating since 2010, when its operators and co-owners, the husband-and-wife team of Thomas P. Wysocki and Heather Finfrock, became interested in the craft.

“A buddy of mine went out west to Washington state to attend a distillery school,” said Wysocki, a quality-control chemist at Eli Lilly and Co. “He told me all about it, and I was sold.”

Unfortunately, the banks weren’t quite as sold. In 2010, the couple secured an old-school federal distilling license, but had difficulty getting financing to start a conventional, wholesale-only distillery. Then came the new law.

“I said, ‘This is a much better formula for success,’” Wysocki recalled. “Let’s find a location with good foot traffic and totally rock it.” 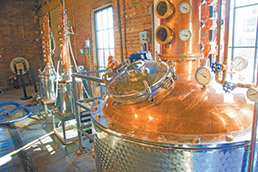 Heartland Distillers, which wholesales small-batch vodkas and gins, on the other hand, wasn’t in a rush to get a craft distilling permit.

In fact, it just recently applied for one. The company, Hobson said, is already doing a comfortable business as a conventional distiller, and wants to take its time rolling out direct-to-the-public sales. Heartland plans to start out by opening its production facility for maybe 10 to 12 hours each week to the public, offering tours, samples and, of course, by-the-bottle and by-the-case sales.

Hobson figures Heartland processed 8,000 to 10,000 gallons of spirits this year, and he thinks the company will produce more in 2016. He said interest in the distilling business is high among investors, though their ardor tends to cool when they examine all that’s involved.

The initial investment for location and distilling equipment can run $1.5 million or more. Nevertheless, Hobson said that, given the popularity of artisanal “brown goods” (whiskeys, bourbons and other aged spirits), more locals will begin to take the plunge.

“It’s a learning curve for everybody,” Hobson said. “The spirit industry is where the brewing industry was 20 years ago. It started as a novelty and then grew from there.”

Sun King Brewing, which two years ago told IBJ it planned to branch into distilling, ultimately adopted a similarly cautious approach. It so far has passed on applying for a permit and is instead focusing on ramping up beer production.

The company last spring successfully lobbied for a law that triples the amount of beer small brewers can sell in state annually to 90,000 barrels.

“We’ve been too busy with our brewing operations to dedicate time and resources to distilling,” said Sun King co-founder Clay Robinson. “Last year, we were focused on changing laws so we could produce more beer, and now we’re focused on infrastructure so we can do that.”

Robinson added: “It’s still on our radar, but it’s a few years out.”

One downside to the new law is that it has more than a few quirks. Selling over-the-counter is illegal on Sundays, and distilled-spirits tasting rooms must also offer an oddly specific lineup of food (including hot soup, coffee and milk).

Even odder (from the perspective of some) is a mandate for entrepreneurs to first obtain a conventional distilling license (which allows the production of spirts only for the wholesale market), brewery or winemaking license, then hold it for three years before applying for an artisan distiller permit.

Though this constitutes a high barrier to entry, some operators were able to skirt the issue. An exception in the law allowed applicants obtaining a conventional federal distilling permit in 2013 to become immediately eligible (with some restrictions) for Indiana’s craft-distilling license.

One of the distillers taking advantage of that first-year exception was Hotel Tango Whiskey, which today offers gin, vodka, rum and moonshine (unaged whiskey). As soon as its aged whiskey has enough time to mature, it will add that to the lineup.

Company President Travis Barnes is excited about Hotel Tango Whiskey’s tasting room, but even more jazzed about its distribution program.

“We’re in about 100 locations in Indiana, and we’ve busted into Ohio and Kentucky and are getting ready to go into Michigan and Illinois next year,” Barnes said. “The business plan has always been that distribution would at some point take over as our main source of revenue.

While artisan distillers are capped at 10,000 gallons of spirits per year for over-the-counter sales, those possessing a conventional distilling license can make unlimited quantities for wholesale distribution. Not that Hotel Tango Whiskey’s over-the-counter business is in imminent danger of hitting that 10,000-gallon mark. During its first year, Hotel Tango produced perhaps 3,000 gallons.

Barnes said that, while he sees strong interest among would-be artisan distillers, their enthusiasm is tempered somewhat after they take a close look at all that’s involved. Among the hurdles, he said, are a thicket of regulations and tax-reporting requirements.

“We’re getting better at it, but during our first few months it was like trying to do Chinese algebra,” Barnes said. “It’s mountains of paperwork. We brought in some outside consultants and spent some money to educate ourselves and make sure we’re doing it correctly. We’re trying to do it in good faith, but the government doesn’t care about honest mistakes. They want their tax money.”

Though Barnes is satisfied with the new law, he holds out hope for refinements. While he’d like to offer his wares over the counter at satellite locations, his most pressing concern is the prohibition on Sunday over-the-counter sales.

“We’ve found that Sunday is the biggest tourist day for out-of-state folks,” Barnes said. “They’re the ones who really want to buy a bottle and take it home. And they can’t. That’s kind of limiting to us.”

The issue could be taken up this legislative session, said state Rep. Ed Clere, a New Albany Republican who championed the artisan distilling law and favors expanding it to allow seven-day-a-week take-home sales.

After the law’s passage, Huber’s, which draws some 600,000 visitors a year, expanded its distillery, which has operated for years thanks to possessing the state’s one-and-only brandy distilling license. Huber’s has added 10,000 square feet of distilling space; purchased a second, $500,000 still; and bought 60 more acres of farmland to grow grains for distilling.

“They’ve been running those stills non-stop,” Clere said. “The investment we’ve seen has been exactly what we expected.”

“There’s been a lot of discussion about that,” Clere said. “I’m open to anything that makes the law better. But that three-year waiting period was a compromise in the original legislation to help ensure that only experienced and responsible operators were given this additional privilege.”•