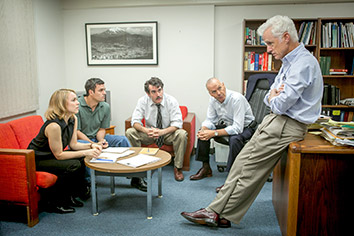 Investigative journalists, a retired conductor, a child soldier, and an animated brief encounter populate my favorite films of 2015.

No, I didn’t see every movie released in 2015. (I skipped, among others, “Fifty Shades of Grey” and “Zombie Cats from Mars.”)

And, no, as of press time, I haven’t seen “Star Wars: The Force Awakens.”

But neither of those facts keeps me from sharing my top movie experiences of the year.

By sparing us subplots, director Tom McCarthy and his co-screenwriter, Josh Singer, keep the attention focused on both the horror of the Catholic Church pedophile priest scandal and the need for strong, independent newspapers to investigate such outrages. Thanks to an expert cast, none of the reporters or editors here are played as superheroes. Rather, they are very human professionals committed to doing their jobs, no matter where the truth might lead. Riveting, moving and important.

My favorite performance of the year belongs to Michael Caine as a long-retired conductor on a spa vacation asked by an emissary from the queen to conduct his most famous work for Prince Philip’s birthday. But plot is secondary to Paolo Sorrentino’s wistful, gloriously shot, often loopy and impactful meditation on friendship, creativity and the way people connect to one another over the course of a lifetime. The spa setting allows for brief encounters with a world of wonderful characters in the one film this year I’m most looking forward to rewatching.

Often difficult to watch, Cary Fukunaga’s unflinching film tells of an orphan (a remarkable Abraham Attah) trained as a soldier to fight in a civil war in an unnamed African country. Idris Elba gives complexity to his warlord mentor—at first a type we’ve seen before, but added dimension is revealed when his power is diminished.

I’m glad I went into the latest from Charlie Kaufman (“Adaptation,” “Being John Malkovich”) knowing nothing about it. Let’s just say it’s animated, there are only three voice actors, and it earns its R-rating. But let’s also say it has two of the richest characters and one of the most nuanced relationships in film this year. Jennifer Jason Leigh is particularly heartbreaking and truthful.

Conversation can be as compelling as a chase scene when it’s in the right hands. “End of the Tour” consists mostly of a journalist (Jesse Eisenberg) interviewing a quirky best-selling author (Jason Segal as David Foster Wallace). But playwright Donald Margulies (the Pulitzer-winning “Dinner with Friends”) subtly puts enough turns in the road to keep the ride fascinating. After seeing it, you are unlikely to read a magazine personality profile in quite the same way.

No, there’s nothing special in the direction or cinematography. This looks like a standard bio-pic. But it not only tells an interesting story—about blacklisted writer Dalton Trumbo—but also has wonderful supporting work and sharp dialogue, and moves at a brisker pace than most such films, adding up to a very satisfying experience. Sometimes, straight-up storytelling works best—as Trumbo himself knew.

Matt Damon has been rescued on film before. And space has offered obstacles to previous cinematic astronauts.

But the seemingly simple premise of “The Martian” makes for a terrific popcorn film that also manages to celebrate science and human ingenuity in a rousing way.

Dr. Dre and Ice Cube produced the movie—which implies an attempt to shape their own legacy—but that doesn’t take away the exhilaration of this look at members of the band N.W.A. and their efforts to gain control of their own music after bursting onto the music scene with the title album.

I still contend that Bing Bong should have been rethought (if you haven’t seen the movie, that sentence probably seems really strange). Still, “Inside Out” remarkably takes a small, small story and tells it with huge, huge heart and imagination.

10: Call me an optimist, but I’m holding this spot open in case “Star Wars: The Force Awakens” rocks. If not, I’ll fill it online with “Clouds of Sils Marie” or “Carol” or “Steve Jobs” or “The Big Short” or “Ex Machina.”•