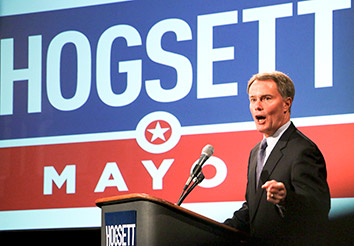 Joe Hogsett had name recognition, mountains of money and a history in public service here through his roles as U.S. attorney and secretary of state.

So it didn’t come as a huge surprise to political observers that the Democrat won a resounding victory in the Indianapolis mayor’s race this November against Republican small-businessman Chuck Brewer.

So clear was the victory that observers considered it boring.

But though Hogsett coasted to victory—racking up endorsements, $4 million in campaign contributions, and 62 percent of the vote—he’ll have a tougher road ahead of him once he takes office Jan. 1.

Indianapolis leaders said the rising crime rate, the city’s dwindling reserves and increasing concerns about local schools will be major issues with complicated solutions for Hogsett to tackle. He’s been clear about one of his plans to reduce crime—hiring 150 more police officers—but he hasn’t laid out plans that are quite that specific for how to deal with the city’s finances or education.

The election, which had record-low voter turnout, also brought Hogsett another gift in the form of a Democrat-controlled City-County Council, which has been a source of frequent conflict for outgoing Republican Mayor Greg Ballard.

But since being elected, Hogsett has made aggressive strides toward bipartisanship, saying the makeup of the council doesn’t matter to him. He said he won’t “roll back” Ballard’s legacy and appointed a former member of his administration to his transition team.