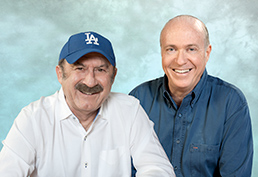 Bob Kevoian and Tom Griswold started their Indianapolis show in 1983.

Bob Kevoian, part of the enormously popular “The Bob & Tom Show” on WFBQ-FM 94.7 since its 1983 inception, in early November announced his retirement. The retirement is effective at the end of the year, Q-95 officials said.

Kevoian, 65, announced the decision during his induction—along with partner Tom Griswold—into the National Radio Hall of Fame at the Museum of Broadcast Communications in Chicago.

“The Bob & Tom Show” airs locally during morning drive time (6 a.m. to 10:20 a.m.). The show went into national syndication in 1995. It has been a local ratings leader almost since its first broadcast. The average price of an ad spot on “The Bob & Tom Show” is more than double the price of advertising on any other Indianapolis-area morning radio show, media buyers said.

The show, which features comedy skits, parody acts and humorous takes on the day’s news, and is interspersed with rock ’n’ roll music, is carried on 130 stations nationwide. It has won five Marconi Awards and generated more than 50 comedy albums.

Griswold, 62, promised the show would continue even without his longtime partner.

“It was a huge thrill to be inducted into the National Radio Hall of Fame with my partner, Bob,” Griswold said in remarks on Q-95’s website shortly after the duo’s induction. “He will always be a part of ‘The Bob & Tom Show,’ and his presence will continue to be felt as we broadcast the show for many years to come.”