Over the course of her storied career, Tamika Catchings has spent many hours at the NBA and WNBA offices. Whether it was for league meetings, union business or just because she was in town, the Indiana Fever star always felt comfortable there. 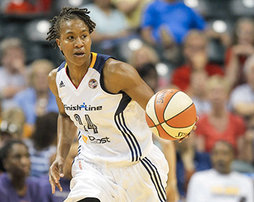 Last month, Catchings had a different reason to come to New York. The 10-time All-Star spent a few weeks in January as an intern at the suggestion of NBA commissioner Adam Silver.

"We had a meeting in November and he thought I should intern with the league to meet all different types of people in the office," Catchings said. "It really was a great experience."

Catchings will begin her final season in the WNBA this May and still isn't sure what she wants to do when her career ends. She has said she wants to stay involved in basketball as potentially a general manager or in another front-office position. She also wants to expand her Catch the Stars Foundation. So Silver thought interning might help her get a better understanding of the business side of the league.

"In addition to being a world-class basketball player, Tamika is passionate about helping others. Whether hosting NBA and WNBA fitness clinics, leading her Catch the Stars Foundation, promoting the importance of education or inspiring others with hearing issues to achieve their dreams, she has been a tireless ambassador for our sport," Silver said. "We were thrilled that she joined us an intern in the league office, and we benefited tremendously from her ideas and perspective."

Catchings was part of a program that the league runs for NBA and WNBA players to help them with life after basketball.

"Players are eager to learn what opportunities there are for them," said Todd Jacobson, NBA senior vice president of social responsibility. "For Tamika specifically to see the business day in and out. She was taking notes, participating like anyone else if they were working or interning here. It speaks volumes about Tamika."

Catchings had daily meetings with a variety of groups that included the junior NBA.

"People were excited that I'm here," Catchings said. "When I sit down and start asking questions to really figure it out you can tell their mind shifts more to the internship. At first when I walk in, it's like Tamika's here. Then it's more like a business relationship."

She was impressed at how all the different parts of the league office work together to put on events. She sat in a lot of meetings about the upcoming NBA All-Star Game in Toronto.

"Even having my own foundation, a lot of times you just show up to the event," Catchings said. "You don't have to worry about everything else that happens to get the event going. Seeing the meetings where they are preparing for such a big event was very useful."

Catchings' offseason wasn't just spent as an intern and working with her foundation. She found time to write a book which comes out in March and also received the Civil Rights Museum Legacy Award days before she started interning. An honor that meant a lot to her.

Her father Harvey, a former NBA player, had walked with Martin Luther King Jr. in Mississippi when he was a teenager.

"I'm proud my dad stood up for what he believed in," Catchings said, "He stood up for all of us to have the opportunity to have freedom."

Catchings' last day as an intern was on Jan. 27. She had breakfast in the cafeteria, a few tables down from an action photo on the wall of her in her Fever jersey. She'll don that jersey for one more year. She plans on having a farewell tour in every city with an event to help promote her foundation.

"It's a way to say thank you to all the fans out there and bring more awareness," Catchings said.

After one last meeting, she headed out. Not before getting a few encouraging words from Silver, who stopped by to say goodbye.

"He said that he hoped that I learned a few things and that they definitely had gotten a few ideas from me," Catchings said.