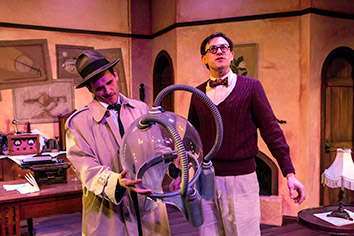 For every authentic “Murder, My Sweet,” “Out of the Past,” or “The Big Sleep,” there’s a spoofy “Dead Men Don’t Wear Plaid,” “Who Framed Roger Rabbit?” or “Guy Noir” Prairie Home Companion segment, all trafficking in the cliches of trench-coated, hard-drinking investigators, femme fatales, and voiceover narration. Shout out “film noir” as a genre suggestion at a ComedySportz improv show and you know what you’re in for.

Which is one of the reasons I was surprised at how palatable Joseph Zettelmaier’s new play, “Pulp,” felt in its world premiere at the Phoenix Theatre (through March 6)—although credit should go as much to the production as to the play itself.

The plot, such as it is, concerns a private eye (Eric J. Olson) hired by a sultry romance writer (Angela R. Plank) to investigate the gruesome (offstage) murder of her literary agent.

Complicating matters is that she’s one of four suspects, each of whom writes in a different genre. The play’s gimmick is that those pulp-fiction genres—romance, science fiction, superhero and horror—each, in turn, take over the plot of the overarching story. Tropes from those styles work their way into the investigation of the crime, with sometimes predictable/sometimes surprising results.

At least, the details are surprising. The plot itself, like those in many such period detective tales, is really beside the point. It’s a signal not to expect much depth when you’ve got a detective named Frank Ellery, a science fiction writer named Bradley Rayburn, and a horror scribe using the name R.A. Lyncroft. If you get the references, this is either the show for you or you grew up reading Mad magazine.

As Ellery, Eric J. Olson manages to ring some genuine human feeling out of his efforts to deal with his troubled past—he was once an illustrator who, well, I’ll let you find that out for yourself. Most of the time, though, he has the thankless task of playing straight man to the wackiness of the quartet of crime suspects. 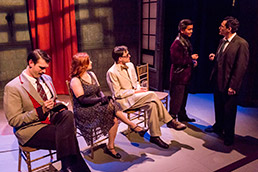 Ellery, below, grills a quartet of writers who are all suspects in the murder of a literary agent.

All are fine, but if I were the local cops, I’d consider pressing charges against Michael Hosp for hilariously stealing just about every scene he’s in. As adventure writer Walter Cranston-Smith (and his would-be superhero alter ego), Hosp also manages two hilarious exits, making the most of his cape, cowl and height.

“Pulp” is part of the National New Play Network Rolling World Premiere program, which means it will receive independent productions at two other regional theaters around the country. I wouldn’t want to investigate, though, since it’s tough to imagine the play being in better hands elsewhere.•