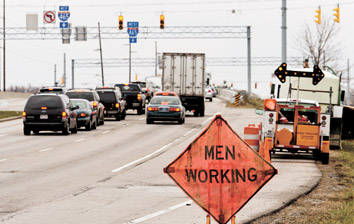 Cities and counties are set to receive millions of dollars for their road and street projects, but elected officials are facing tough decisions about whether to raise local vehicle taxes to keep the dollars flowing.

A $1.2 billion, short-term road-funding plan passed by the General Assembly includes nearly $900 million in mostly one-time cash for local projects. But some of that money is available only if local governments match it.

For cash-strapped cities and counties, that could be difficult, although the bill gives cities new opportunities to impose vehicle taxes and gives counties the opportunity to raise those taxes. The bill is awaiting Gov. Mike Pence’s signature.

Officials say the opportunity is welcome.

“We never anticipated they were going to raise a tax and just give us money to spend for roads,” said David Bottorff, executive director of the Association of Indiana Counties. “We’d always anticipated there’d be a shared commitment.”

Instead, lawmakers—shortly before adjourning—passed a program that includes $430 million in one-time local option income tax disbursements, most of which must be used for local road repairs. It also bolsters a matching fund for local road and bridge projects two ways—by redirecting 1.5 cents from the 7-cent sales tax charged on gasoline purchases, a move that will generate $277 million over four years, and by transferring $186 million in one-time funds from state reserve accounts.

To get that money, local governments are required to match the cash dollar for dollar. The new law gives them three ways to come up with that match: the new local option income tax disbursement, rainy day funds, and money generated from wheel taxes and excise surtaxes, which are vehicle taxes charged on registrations.

But are local communities clamoring to raise or institute new vehicle taxes?

Matt Greller, executive director of the Indiana Association for Cities and Towns, said he believes there will be wide interest.

“I think you’ll have a fairly significant number of folks go down that avenue and adopt a wheel tax,” Greller said.

The bill allows counties to increase the amount they collect from vehicle-related taxes (only about half of Indiana’s 92 counties currently collect such a tax). It also allows cities with at least 10,000 people to adopt similar taxes. If each of the 76 eligible cities did so, the new taxes could raise up to $90 million starting in 2017.

Advocates said a community’s desire to immediately adopt a new tax or expand an existing one will likely depend on how much money it gets from another part of the bill—the distribution of revenue from the local option income tax trust fund. That’s income tax revenue that residents have already paid but has been held back from local governments in an attempt to even out swings in tax revenue.

Marion County is slated to get $59.4 million and Hamilton County $65.7 million from the 2016 special disbursement.

Bottorff said he thinks elected officials might be initially reluctant to impose wheel taxes because that local money is on its way.

“I doubt anybody’s going to immediately increase the wheel tax, but I think they’ll evaluate how long the [local income tax] money will last them and then start to evaluate other options,” Bottorff said.

In Hancock County—slated to receive $10.4 million this year— county engineer Gary Pool said the money will allow him to add several years of life to the county’s 660 miles of roads, but he said more long-term funding is needed.

“You can crack-seal and seal-coat, but eventually you have to replace the road,” Pool said.

Hancock County collected nearly$2 million in vehicle-related taxes in 2014. But not all area counties have wheel taxes. Hamilton and Boone counties are among those that don’t.

This year, local governments might have other options for matching state funds.

A relatively mild winter means cities and counties might “have reserves they can free up for projects and get those half-funded by the state,” in lieu of raising or instituting a new tax this year, said Stephanie Yager, executive director of the Indiana Association of County Commissioners.

Meanwhile, lawmakers will continue debating whether higher taxes will be necessary to fund state projects. The law requires a task force to develop a long-term plan for funding highways and major bridges.

Advocates say a statewide tax increase will likely be back on the table next year.

“I don’t see how it’s possible to really address long-term needs” without it, Greller said.•