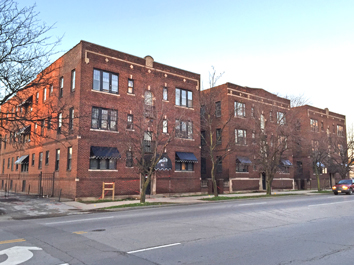 A local developer has purchased a trio of dilapidated apartment buildings on the near-north side and is embarking on a $5.6 million revamp and expansion of the property.

The project, dubbed 21 West, will feature 65 “upscale” market-rate apartments when finished, said Gary Levine, a partner at Axia Urban. Construction should start by fall and finish in 18 months.

“We think it’s going to be a definite improvement to the area,” he said. “With the possible Methodist expansion, we think there’s going to be demand for this kind of housing.”

The brick, 1920s apartment buildings sit less than two blocks east of the Methodist Hospital campus. They're now vacant and will be completely redone, Levine said.

IBJ reported April 11 that Indiana University Health hopes its $1 billion plan to expand Methodist will spawn development south of the campus, creating an area where employees can live adjacent to where they work.

Now, Axia Urban is seeking a zoning variance to reduce the number of required parking spaces from 98 to 56. Department of Metropolitan Development staff recommends approval, and a city zoning board is set to hear the request April 12.

“One of the problems was that there was no parking,” Levine said. “This will give you parking for those buildings.”

The new building that will be at the rear of the property will have 17 units, including three two-bedroom apartments.

Fast-food staples McDonald’s, White Castle and Hardee’s line the north side of 16th Street. But a broader range of options are beginning to emerge. Two blocks east, Penn & Palate opened last year in the Piccadilly building at the northwest corner of Pennsylvania and East 16th streets, and The Thirsty Scholar opened in 2013 in the Penn Arts building at the southeast corner. Both buildings are owned by Reverie Estates.

A3 Design is the architect on Axia Urban’s 21 West project. Renderings aren’t yet available.The design is subject to the approval of the Regional Center hearing examiner.

21 West isn’t Axia Urban’s only project on the near-north side. At 2131 N. Meridian St., it’s co-developing a 47-unit project with Near North Development Corp. that’s under construction. It features 11 affordable units and should be finished in the fall.