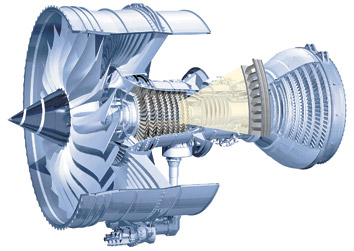 Jet engine research and development in Indiana is set to get a $33 million boost through a new partnership between Rolls-Royce Corp. and Purdue University.

Rolls-Royce has expanded its existing relationship with Purdue with the goal of developing new jet propulsion systems. The company and university together will spend the $33 million to develop and operate two research centers in the areas of advanced thermal management systems and advanced compressor systems.

“You want to have world-class engines coming out of the factories,” Burkholder said. “We need these technologies to go into future designs. The technology takes a significant period of time, investment and perseverance. … It really does push physics beyond where it gets pushed in any other area.”

The partnership, which Purdue president Mitch Daniels called “a badge of pride” for the school, is set to be formally announced during IBJ’s Aviation & Aerospace in Indiana breakfast event Thursday at the Marriott Indianapolis Downtown. The event was expected to draw more than 550 attendees.

The research team at Purdue will focus both on basic and applied research.

One of Purdue’s main contributions will be its facilities. The university in 2015 received a $5 million grant to expand the Maurice J. Zucrow Laboratories, which is the nation’s largest university-based propulsion laboratory. The funding will expand lab capacity, including testing cells that will directly benefit the Rolls-Royce partnership, said Dan Hirleman, Purdue’s chief corporate and global partnerships officer.

“Some of the facilities here would have no duplicates at Rolls-Royce,” Hirleman said. “They would depend on us. It’s a really mission-critical part of their technology development."

Rolls-Royce has had a longtime relationship with Purdue. It selected Purdue in 2003 to study high-Mach propulsion—the first Rolls-Royce university partnership of its kind outside Europe.

The expanded alliance, called a university technology partnership, also is the first of its kind for Rolls-Royce in the U.S.

Purdue hopes the partnership will allow it to attract and retain talented students—and allow them to find good jobs in aerospace . Rolls-Royce is already a big recruiter from Purdue, employing nearly 600 of its graduates.

“They’ll come in and find exciting projects with great faculty and amazing facilities,” Hirleman said. “They might not have thought about making a career in Indianapolis, but we think after they’ve done a (fellowship or doctoral program) and worked closely with the Rolls-Royce folks, that they would certainly have an attraction."