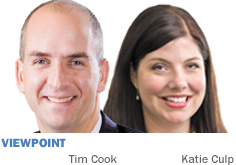 Eight hundred new jobs and $40 million in capital investment. Based on these stats alone, Salesforce’s announcement to expand into the Chase (soon-to-be Salesforce) Tower is a monstrous economic development project worthy of the attention it has garnered. But beyond the numbers, Salesforce’s decision could have profound impacts statewide for a generation to come.

• Economic. Simply put, the annual impact that comes with this many high-paying jobs in the very heart of downtown Indianapolis cannot be overstated, especially in a downtown committed to incubating a work-live-play demographic. Ever since Salesforce acquired Exact Target in 2013, the city and state have been holding their collective breath about which direction the new owner would take its burgeoning tech workforce ensconced downtown. Rather than moving jobs or future growth to other parts of the country, Salesforce has doubled down on Indy.

• Tech. Central Indiana has been riding something of a tech wave the past 10 years. Local tech pioneers young and younger, along with organizations such as TechPoint, have put it on the map—a map that continues to populate with more success stories each day. According to the Indiana Economic Development Corp., the number of tech firms it engaged that selected Indiana for expansion was up 156 percent in 2015 over 2014, with the vast majority choosing central Indiana. This announcement amounts to an anointment of sorts—one of the most celebrated and successful tech companies in the United States formally giving Indianapolis its seal of approval as a place tech companies should want to be. Like Angie’s List, Aprimo and ExactTarget before it, Salesforce is sure to produce its own spin-off tech entrepreneurs. Out of this population might emerge the next Scott Jones, Scott Dorsey or Kristian Andersen.

• Workforce. Eight hundred jobs is a lot to fill in any sector, especially for a city the size of Indianapolis. Our city currently doesn’t have the qualified workforce to do it. But this is a good thing in the long run. The need to fill these positions, along with the scores of other tech companies in central Indiana vying for the same talent, will drive demand at Indiana learning institutions. Instead of the brain drain, Indiana-based university graduates will have more options to stay in-state. Additionally, it will drive wage growth in the region, increasing the standard of living of Hoosiers as well as the tax base, and making central Indiana an even more attractive place to be.

• RFRA. When the RFRA brouhaha erupted during the 2015 legislative session, Salesforce founder Marc Benioff was among the most vocal critics, and Salesforce Marketing Cloud CEO Scott McCorkle played a key role in brokering the RFRA fix. This breakthrough announcement might inoculate Indiana against further perception problems with site selection consultants and with companies looking to expand.

• Civic. Salesforce’s commitment to 100,000 volunteer hours in the coming years will not only have a huge impact on the worthy organizations receiving their help, but will also set the bogey for other like-minded organizations to make volunteerism front and center.

Salesforce’s announcement has the opportunity to be a game-changer, both local and statewide. Indiana has the country’s attention—now it must deliver.•

Cook is CEO of KSM Location Advisors. Culp is president.