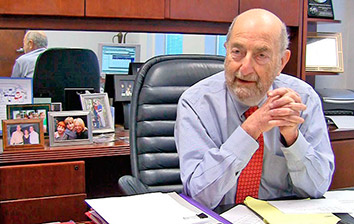 Attorneys in the estate case of deceased Celadon Group Inc. co-founder Steve Russell say they're hashing out a settlement, a move that would cease the high-profile wrangling over his $31 million estate and curtail estate losses from legal fees.

The dispute, which made its way to Hamilton County Court in April, pits the children of Steve Russell's first wife against his second wife, Livia Russell. The children claimed Livia Russell orchestrated changes to his will late in his life while he suffered cognitive impairment and memory loss, effectively increasing her payout at their expense.

The case also involves David Faust, Steve Russell's friend and "personal representative" in charge of the estate. Faust's attorney, Jack Hittle of Church, Church, Hittle & Antrim, told IBJ in an email that "the parties have agreed to postpone hostilities while [a] settlement is being discussed."

Hittle did not respond to calls or emails seeking further comment, but his remarks come after his client missed an Aug. 8 deadline to respond to a complaint filed June 15 by Steve Russell's three children—all from his first wife—Jonathan Russell, Stewart Russell and Melissa Russell Rubel.

Attorney Richard Smikle of Ice Miller, who represents the children, declined to comment. Attorney E. Davis Coots, of Coots, Henke & Wheeler, said in an email, "as any lawsuit, we are exploring whether a settlement is possible."

None of the parties have filed court documents regarding settlement talks, and a status hearing is scheduled for Oct. 6.

The June complaint filed by Russell's children asked a judge to void the August 2015 will that Livia Russell allegedly engineered by exerting "undue influence" and instead resort to a 2008 will.

The 2015 will was signed two years after doctors examined Russell and noted brain damage and cognitive impairment, and just a few days before a neurologist said Russell could no longer function independently and had "no insight into his cognitive deficits."

Under the 2008 will, Livia was designated $10.5 million of Steven Russell's $31 million estate, $4 million of which was to be paid upfront. The rest was to be placed into a marital trust and disbursed over time, and any remaining funds at Livia Russell's death would go to Steve Russell's children.

Under the 2015, Livia Russell was to be paid $9 million up front, meaning a maximum of $1.5 million would go into the marital trust.