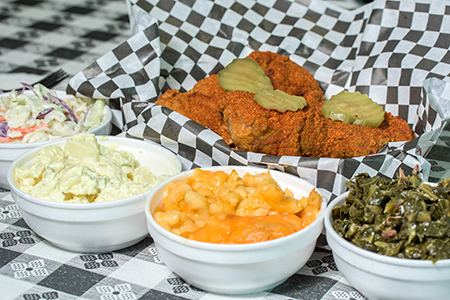 It takes guts, naivete, confidence or all three to open a fried chicken joint in the shadow of a KFC.

Not that KFC is the end-all-be-all of deep-fried poultry. Far from it. But such proximity does create some obvious challenges.

The owners of what used to be Zacky’s Hot Dogs & BBQ are giving it a try. Zeke’s preserves Zacky’s limited inside seating and DIY sensibility, but the lack of polish contributes rather than detracts from its comfort level. Whether grabbing a bag of takeout or stopping in for a mini-feast, you are likely to feel well taken care of.

And, most important, the chicken is very good.

The prime question here isn’t, “What?” but, “How Much?” Hot Chicken, served with two sides, bread and pickles, is available from One Piece ($7.99) to Half ($12.99 for breast, wing, thigh and leg). Heat choices range from Southern—with virtually no heat to get in the way of the crisp chicken—to kickin’, which is likely to keep your kids from daring to eat your share. If you want to limit yourself to wings, they run five for $5.99 or 10 for $10.99. While not as boldly spiced as neighboring KFC, the chicken here demonstrates a degree of care you won’t find in fast-food land. 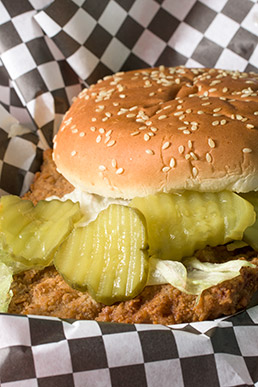 Eight options for sides include a fairly standard Mac-N-Cheese, sizable-but-thin Onion Rings, Crinkle Cut French Fries and Old-Fashioned Baked Beans. We supplemented with Battered Corn Nuggets ($5.99), which made us wonder why these aren’t more common as an appetizer alternative to mozzarella sticks.

Straying onto the sandwich part of the menu turned up a more-than-respectable Chicken Sandwich ($8.49) with an appropriately soft bun holding a thick piece of chicken with a choice of Zeke’s Mayo or barbecue sauce. I suggest trying the Breaded Pork Tenderloin ($8.99), a wonderfully erratic piece of breaded goodness whose crunch doesn’t hide its meat.

Bonuses: A small but smart collection of ice cream and floats that will make you glad you dined in instead of took out. And a conversational owner who makes you feel like you’ve been dining here for decades.•