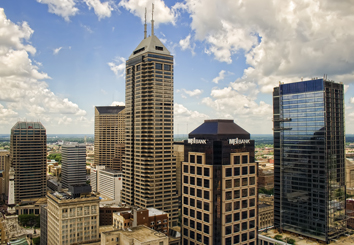 Indianapolis notched a top-10 ranking for tech-company office leasing during a recent one-year period, according to a new national survey, illustrating the city's allure for local and out-of-town tech firms.

A report published Monday by real-estate services Jones Lang LaSalle IP Inc. found that tech companies signed leases for just under 985,000 square feet in the Indianapolis metropolitan area between the third quarter of 2015 and the second quarter or 2016. That showing was enough to place it 10th among the 45 cities ranked. The total square footage included new leases, lease renewals and renewals with expansions.

"Tech firms have been a major driver for office user demand over the past 18 months," senior research analyst Mike Cagna said in the report, "a trend we expect to continue due to Indianapolis’ affordability and tech-savvy talent pool being churned out by area universities."

Real estate firms like JLL and CBRE have been publishing more research on the technology industry, partly because it has emerged as an outsized driver of real estate transactions.

"The technology sector remains the leading industry for real estate expansion in the United States—driving nearly 25 percent of leasing activity across the country over the past two years," the report said.

In addition to the real estate rankings, JLL gave 45 metropolitan areas "market scores" to allow investors to quickly identify which markets would be the most resilient through periods of economic contraction, the firm said.

The scores were based on economic momentum, talent pool, innovation and cost. Indianapolis ranked No. 22 overall, leading the pack in one category:

They also highlighted the local costs of living and doing business—each well below the national average. The recent tech demand for real estate has caught the attention of Indianapolis building owners, researchers said, "who are starting to construct more unique and collaborative spaces to attract these users."

They also noted that while downtown has increased its supply of desirable tech space, "the suburban markets continue to offer mostly standard, second-generation office space."