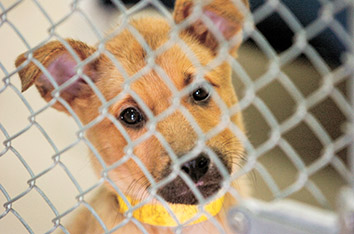 Humane Society of Indianapolis CEO John Aleshire, who is credited with helping the organization execute a major turnaround, has announced he plans to retire from the organization next year.

Currently, the not-for-profit animal welfare organization euthanizes less than 10 percent of the animals it takes into its shelter. Volunteers logged more than 58,000 hours with the organization in 2015 and it's debt-free.

None of that was true when Aleshire joined the Humane Society in 2008.

The organization was operating at a deficit and saddled with $3.1 million in debt—a considerable amount considering that its annual budget was $3 million.

Internal morale and public perception were poor. The organization’s animal shelter euthanized 40 to 50 percent of the animals it took in, sometimes for reasons as fixable as kennel cough or a broken bone. Its previous CEO had been asked to resign.

“It was just not a place that was well thought of,” Aleshire said.

The 66-year-old Aleshire still recalls his strong reaction when he read a news story in 2008 about the departure of the Humane Society’s previous CEO: “’What sucker will take that job?’”

But after a board member contacted him about the position, Aleshire started to think differently.

“The board really had this vision of making the organization stellar,” Aleshire said. He also perceived that the community was pulling for the Humane Society to succeed.

He decided to take the job, and set about working to improve the organization.

Shortly after Aleshire joined the Humane Society, the group changed its euthanasia policies. It would no longer put down animals for reasons of space or length of stay. Its euthanasia rate dropped as a result and is now below 10 percent.

The organization started targeted outreach to parts of the city with high stray populations and high animal surrender rates. As part of that outreach, the Humane Society opened a low-cost vaccine clinic and spay/neuter clinic in Indianapolis’ Haughville neighborhood.

In 2010, the group hired its first-ever chief financial officer—a certified public accountant who helped the organization develop a balanced budget and a plan to tackle its debt. The organization paid off that $3.1 million in debt in 2014.

Community relations were also a focus, Aleshire said. The organization started reaching out to others. It spread the word that its shelter was bright and clean and its animals were well cared for. It took its cats out of their cages and put them in a free-roaming environment. It started a summer camp program for children, the Paws and Claws Club, in 2009.

All of these things made a difference, Aleshire said.

“Volunteers came back. The donors came back. People looked at us differently. Significant donors began to take a look at us,” Aleshire said.

Mike Stewart, chairman of the Humane Society’s board of directors, has been a member of the organization’s board for the past six years.

“His accomplishments are pretty far and deep,” Stewart said of Aleshire. “He really did just grab the organization by the bootstraps and put it back on financial footing.”

Aleshire plans to remain in his job until September 2017, giving the Humane Society ample time to find its next CEO.

“I wanted to make sure the organization had a thoughtful, careful, well-planned, seamless transition,” he said.

Stewart said the board plans to spend the next couple of months reflecting on its needs and what it wants from its next CEO.

The board will start recruitment efforts in earnest in January, Stewart said. The group currently has 63 full-time employees and seven part-time employees.

Stewart said he’s not concerned that the Humane Society will lose ground when the man responsible for its turnaround steps down.

“He changed the attitude of the organization,” Stewart said of Aleshire. “He has brought it through a transformation period, and we’re on an upward trajectory.”