Home » New firm focuses on innovations, including ‘ear in a dish’ 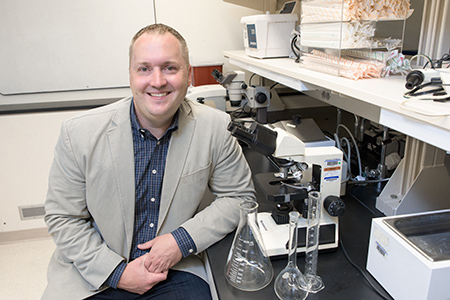 Founded just a year ago, Monon Bioventures made a big splash this spring when it won “Innovation of the Year” at TechPoint’s Mira Awards. The company and Dr. Karl Koehler at the Indiana University School of Medicine are developing the first ever “ear-in-a-dish” model to study and treat hearing loss. They are able to grow a functional mouse ear from stem cells in just 60 days.

The CEO of Monon Bioventures is Joe Trebley, 37, who holds a doctorate in medicinal chemistry from Purdue University and was previously head of startup support and promotion at the Indiana University Research and Technology Corp.

As a rule, do scientists have a good head for business?

(Long laugh.) In Indiana, we’re lucky to have some of the brightest minds in the world. But generally speaking, no, scientists are not the best businesspeople. And even if they do have skills, they have a day job. And we want them to keep doing what they do best. We feel it’s best if we all stay in our own lanes.

What kind of advice do they generally find the most helpful?

There’s a range of sophistication. Some of them don’t want any involvement [in the business side], and some want to run their own companies. We really fit with the group that wants to stay close to the science and we run the business.

Is Monon Bioventures an incubator? A venture capital firm? What exactly do you offer?

I think the best word to describe us is “accelerator.” We partner with research institutions in Indiana and across the country to help investigators take their idea from the bench to the clinic and into the marketplace.

So how do you do it?

Our model allows scientists to be scientists and we run the business aspect—everything from getting funding, putting the right talent team around the asset. We’re really looking for innovative ideas that are game-changers. Because we come in so early, we can take a little more risk than a typical venture capitalist and we can move the asset into something that is investable.

Where are you based?

We are splitting time between Launch Fishers and the Indiana Center for Biomedical Innovation, the new incubator within the old Methodist Research Institute.

So you don’t provide office space or wet labs, right? But you do offer management teams and money and business advice?

Yes, and we really feel that is the resource that’s constrained. And while there’s just two of us at Monon Bioventures, we have a deep bench of advisers and networking partners.

How much money have you attracted for companies since your founding last year?

Our initial project, where we engage in an investigator, is most often to write a small business grant. Most of the assets aren’t ready for any kind of equity investment yet. There’s usually some de-risking needed first.

So maybe an investigator has found what could potentially be a new drug. And there needs to be some toxicology done to see if it’s safe. That would be an example of an experiment that would de-risk the asset.

How small is a small business grant? What’s the average grant you’ve landed?

We partner with the National Institutes of Health, and the grants are usually around $250,000.

And how much money have you awarded to date?

I’m probably not comfortable putting that number out there at the moment. We have six active programs. That means we have found an investigator that has made a discovery that we believe could be the answer to an unmet medical need.

How did you come up with the name Monon Bioventures?

What we really like about the history of the Monon Railroad is that it was the connector of Indiana to the rest of the Midwest and the country. We’re all Hoosiers. We like the concept. I’m also a graduate of Wabash College, and every year we play for the Monon Bell against our rivals, the DePauw Tigers. So it has a special meaning to us.

Talk about the “ear in a dish.” How does that technology work?

It’s a stem-cell-based technology. Stem cells can be turned into anything in the body: any organ, any skin. What we’ve been able to do is take the stem cell, figure out the operating system enough to program it to turn into the functional working of an inner ear. It’s the part inside the ear that actually picks up sound.

So how far away is that from commercialization?

Not as far as you would think. We have to create something that’s more scalable. So now we can grow tens or hundreds of ears. We want to scale up to where we can grow thousands. The idea is, we can use the model to test different pharmaceutical drugs that could be effective in preventing hearing loss. That’s really a first step.

So you’re not developing this as a surgical implant?

No, no, not yet. That’s probably 10, 20 years away at least. And I think that’s one of the things we bring to the table: incremental steps and moving the technology forward.

Any other cool technologies in the works?

Yes. We’re working with a group out of Purdue University developing cell-based therapy and technology that allows [the therapy] for Type 1 diabetes. And we’re also working with the Nationwide Children’s Hospital to help a group there use some probiotics to treat something called necrotizing enterocolitis, which is a disease in premature infants; the surgery to treat it generally has a 50 percent mortality rate. We think we can prevent that with novel probiotic therapies.

If you had a magic wand, what kind of things would you change to help a young company get started and succeed?

I think what most people need is really strong and active mentorship. As a young person, what I’m really blessed to have here is a deep bench of mentors that are experienced and committed to helping companies like Monon Bioventures be successful.•