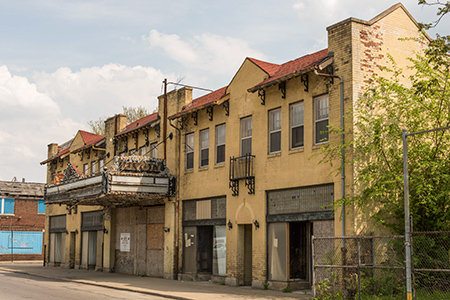 Of the three local sites on the Indiana Landmarks list of 10 Most Endangered buildings, the Rivoli Theatre at 3155 E. 10th St. is in the poorest condition by far. This is its second year on the list.

The facility opened in 1927 as Universal Studios’ first Indiana theater, but the decades have stripped it of its former glamour.

If you look through the upper windows from street level, you can see clear through to the sky. The front doors are covered with plywood and the rickety marquee sign looks ancient.

If the roof isn’t replaced, exposure to the elements will eventually destabilize the walls and lead to even worse damage, said Mark Dollase, Indiana Landmarks’ vice president of preservation services. 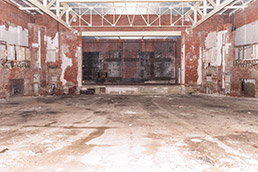 The Rivoli was built as a movie theater in 1927. It later hosted live performances, including shows by Bruce Springsteen, Linda Ronstadt and Lynyrd Skynyrd. The auditorium, seen here, is now gutted. (IBJ file photo)

The Rivoli is within the area served by the Near East Area Renewal Community Development Corp. That organization’s director, John Franklin Hay, said community partners have worked hard to try to save it.

In 2014, the group helped sponsor a redevelopment feasibility study, which proposed rehabbing the Rivoli into a performing-arts theater and building a separate arts and education center to the east.

At the time, the study estimated the renovation cost for both buildings at $11.4 million. Hay said costs might have changed since then.

He envisions a combination of funding from grants and philanthropic and private investments. He’s also hopeful that the theater’s Promise Zone location might help it compete for federal grants.

The Promise Zone designation, which comes from the U.S. Department of Housing and Urban Development, is part of an effort to revitalize high-poverty communities. The status helps improve applicants’ chance of being awarded federal funding for projects.

In the shorter term, roof repairs might soon be under way.

Roof replacement, plus reconstruction of the collapsed second floor, will cost “in excess of half a million dollars,” Dollase said.

Work should begin within a few months, he said, funded partly by a community development block grant and partly with private donations.

In the bigger picture, Hay said, what the Rivoli needs is a savior.

“We have invested in a plan showing a path forward and a reuse of the facility,” he said. “The pieces are really in place to really move forward on development. The plan now needs a committed person—a champion, a developer—to help take it from plan to reality.”•