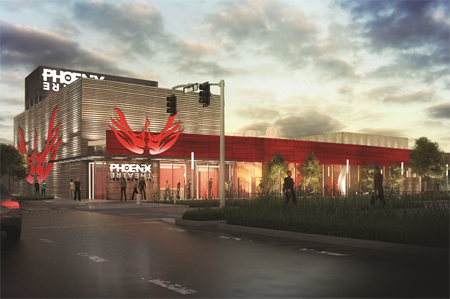 The Phoenix Theatre has secured a $1 million gift from the Allen Whitehill Clowes Charitable Foundation Inc. toward the $8.5 million theater complex it's planning at the northwest corner of Illinois and Walnut streets in downtown Indianapolis.

The gift was announced Tuesday afternoon during a press conference at the site of the planned complex.

The Phoenix announced earlier this month that it had raised $5.1 million toward the $8.5 million it needs to fund construction of the new theater building
Officials said at the time they were launching a capital campaign to raise the other 40 percent of the funds.

With the Clowes Foundation gift, the capital campaign has raised $6.1 million.

Designs call for the 20,000-square-foot building to include:

— a 150-seat proscenium theater;
— a configurable black-box theater with seating for up to 90;
— dedicated classrooms and a rehearsal studio;
— a “state-of-the-art” scene shop and costume shop;
— a grand lobby that will open directly onto the Glick Peace Trail, which is a key stretch of the Indianapolis Cultural Trail;
— a special-events lounge and gallery space;
— a prep kitchen for catered events and event rentals.

The theater complex will total about 20,000 square feet.

In January, the Phoenix acquired three parcels of land on North Illinois Street from two different sellers for $1.8 million. Two of those parcels, which total 1 acre, will be used for the new building. The other parcel contains a 48-space parking lot.

Since 1988, the 33-year-old professional theater has staged its productions in the old St. Stephen’s Missionary Baptist Church at 749 N. Park Ave., about a block north of Park's intersection with Massachusetts Avenue.

Attendance for Phoenix Theatre productions topped 17,000 for the 2014-15 season