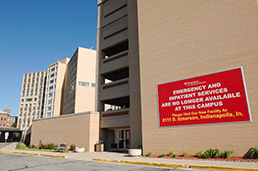 The project, expected to take 18 months, will raze 900,000 square feet of adjoining buildings on a 15-acre site at 1600 Albany St. Costs for the project were not disclosed.

The site had been home to a St. Francis hospital beginning in 1914 until about four years ago, when Franciscan Alliance closed the facility and moved the operations to a bigger and newer campus seven miles south, at Stop 11 Road and Emerson Avenue, near Interstate 65.

The Beech Grove hospital had more than 540 patient beds, but by the time it closed, 90 percent of its patients were being seen on an outpatient basis, hospital officials said.

Two separate properties at the site that house Franciscan Alliance Information Services and Franciscan Visiting Nurse Service recently underwent extensive renovations and will be spared from the wrecking ball.

“Over the years, we have worked closely with Beech Grove city officials and have given serious consideration to possible sale and lease alternatives, and we determined this is the best course of action,” Franciscan Alliance CEO Kevin Leahy said in a written statement. “It always has been our intention to provide for the best possible re-use of this property for the betterment of the Beech Grove community. This decision affirms that goal.”

Franciscan Alliance operates hospitals in Indianapolis, Mooresville, Carmel and 11 other locations in Indiana and Illinois.

Michigan City-based Tonn and Blank Construction, which is owned by Franciscan Alliance, has been hired to supervise the demolition project.