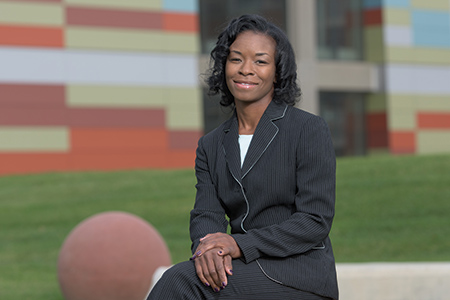 Among her achievements at Lilly, Davis has been a key player in a team that developed and launched Lilly Expanding Access to People, LEAP, a business model designed to improve the health of people living with diabetes by reducing systemic barriers to effective care. Over 20,000 patients were started on insulin during its first year of test implementation in China. “It gives me tremendous pride to know that I helped develop a program that has expanded the reach of our medicines,” she said.

Rising up: Until sixth grade, Davis was under the impression that college was mandatory, thanks to her mother. When she discovered otherwise, Davis informed her mother that it was, in fact, optional. “They don’t have to go to college,” her mother told her. “But it’s mandatory for you.” Said Davis: “To have that determination and that vision to make sure your children had a better life is incredible.” After graduating from Indiana University with a bachelor’s in accounting and finance, Davis worked with PricewaterhouseCoopers LLP, Collins & Aikman Corp. and the Ford Motor Co. before arriving at Lilly.

Career turning point: With a week’s notice, Davis was asked to move to South Africa for a higher-level job she wasn’t confident about. “I was so terrified that I had a huge knot in my stomach the entire 16-hour flight there.” The assignment turned out to be a success and encouraged her “to keep jumping and figure out if the parachute works on the way down.”

“Made it” moment: Passing all four parts of the CPA exam. “Coming from a very humble background, this was a guaranteed improvement of the economic status for me and my family.”

Choosing boards: As vice chairwoman of the Tindley Accelerated Schools board, she’s able to make a difference in a community near where she grew up. Serving on the board of the IU Kelley School of Business Alumni Association allowed her to give back to a program she holds dear. “I studied abroad while at IU and that exposure to different cultures changed my DNA—it changed the trajectory of my life. I like to encourage other students to see the possibilities of what they can achieve if they stay focused.”

Mentor: “When I first joined Lilly, my style was a bit abrasive, which worked in the automotive industry but was not so well received at Lilly,” she admitted. “Cheryl Wilkins taught me a very important lesson early in my Lilly career: It doesn’t do any good to be right but ineffective. She also showed me how important it was to invest in the development of others. As I have continued to invest in both students and young professionals, it is extremely rewarding to watch them mature and achieve higher levels of success.”

Advice for young women in business: “Be prepared, be present, and most importantly, be you. Your greatest competitive advantage is your authentic self. People, particularly women and minorities, spend a lot of energy trying to model what they think successful people should look like. I believe that a large part of my value is the diversity I bring to the table by being my true self. If everyone in the room thinks and acts the same, only one of them is necessary.”